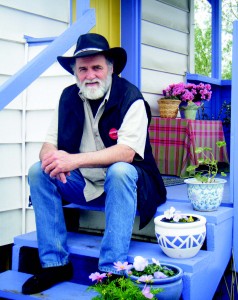 Ken Smedley grew up in Kamloops in the 1950s, where he co-founded The Western Canada Youtheatre (now the Western Canada Theatre). He wrote his first play Renegades for the company and while touring the local region with it, at the age of 19, had a chance encounter with George Ryga, already a legend for his work, The Ecstasy of Rita Joe.  After a stint working in professional theatre in England, Smedley returned to Canada and continued to write plays, many for CBC Radio. Smedley’s one-man tribute to Ryga in 1989 at a National Ryga Retrospective in Montreal was based on Ryga’s novel, Night Desk. From 1995 to 2012, Smedley served as the live-in, artistic director of the George Ryga Centre in Summerland. In 2013 he published The Erotic Exchange (Rich Fog Micro Publishing), followed by a collection of his short plays in 2015,  as well as Elliot Madness, his transgender musical/love story featuring competing rock bands as well as the struggle for sexual identity. He copyrighted Elliot Madness in 1986. Ken Smedley lives in Armstrong. $20 978-1-926605-85-2