The little dugout canoe that could 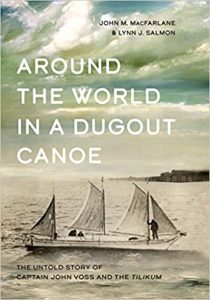 John M. MacFarlane and Lynn J. Salmon have won a John Lyman Book Award for best book published in the category of “Canadian Naval and Maritime History” for Around the World in a Dugout Canoe: The Untold Story of Captain John Voss and the Tilikum (Harbour Publishing $29.95).

The prize is administered by the North American Society for Oceanic History (NASOH) and awarded annually in six categories to recognize excellence in books that make a major contribution to the study and understanding of maritime and naval history.

Around the World in Dugout Canoe tells the story of Captain John Voss, who set out from Victoria in 1901 to claim the world record for the smallest vessel to circumnavigate the globe.

The authors, who spent years researching and writing their book, say it’s an honour to have their work recognized in this way and to have the facts about Voss’s journey available to the public for the first time. MacFarlane and Salmon said in a joint statement: “During our research it became quickly apparent that the real story of Captain John Voss and his remarkable voyage in the Tilikum had yet to be told and it turned out to be a far more riveting tale than either Voss or Luxton produced in their separate accounts of the trip.

“Today the Tilikum still exists as one of the great heritage assets of British Columbia and for mariners worldwide. It is certainly a story for our age — thousand-year-old maritime technology, intriguing characters, proud immigrants, and the start of recreational blue-water cruising. We wish to thank the NASOH for their recognition of this book and hope readers around the world will find themselves as captivated by Voss and his dugout canoe as we have been.”

John MacFarlane is the curator emeritus of the Maritime Museum of British Columbia, curator of the Nauticapedia Project and author of several books and articles on nautical history. He was commissioned into the Royal Canadian Navy (Reserve). He is also a Fellow of the Royal Geographical Society (London), and the recipient of the Sovereign’s Medal for Volunteers and the SS Beaver Medal for Maritime Excellence. He lives in Qualicum Beach.

Lynn J. Salmon makes her home in Courtenay and has written extensively on the marine history of B.C. and her articles have appeared in publications including Western Mariner and the Times Colonist. She worked as collections manager for eight years at the Maritime Museum of British Columbia and recently concluded a fifteen-year career as a radio officer with the Canadian Coast Guard. She is senior editor of the Nauticapedia Project.

You have likely heard about the voyage of Thor Heyerdahl and his Kon-Tiki raft, but unless you own a copy of The Encyclopedia of B.C., the prolonged voyage of Captain John Voss and the Tilikum probably hasn’t hit home. That’s why John MacFarlane and Lynn J. Salmon have teamed up for Around the World in a Dugout Canoe (Harbour $29.95). Voss remarkably sailed from Vancouver Island to London, England, between 1901 and 1904, in a Nuu-chah-nulth dugout canoe, and they claim his oft-maligned character deserves a far more sympathetic portrayal.

The true story of Danish-born “Captain” Voss starts when he was mismanaging some hotels and bars in Victoria. A former mariner, he had gained a shady reputation for alleged involvements with ‘Shanghi’ — that time-honoured British practice of doping unsuspecting barroom patrons who would wake the next morning with a terrible hang-over, miles away, at sea, forced to earn their keep as a sailor.

One winter afternoon in 1900, over soup, Voss boasted to a young journalist named Norman Luxton that he could ‘best’ the achievements of Joshua Slocum, a Nova Scotian-born sailor who, in a tiny yawl named the Spray, had recently sailed 46,000 miles around the world and made a small fortune by writing Sailing Alone Around the World.

Luxton, who had known Voss for two years, was frustrated writing articles about Victoria’s small elite. Keen for adventure, he told Voss he had worked on sealing vessels on the Bering Sea, so the duo hatched a daring plan to out-do Slocum: They would acquire a large First Nations dugout canoe and sail it to London after outfitting it with home-made sails.

Voss’s choice was a large whaling canoe, of the type used by the Nuu-chah-nulth, carved from a solid red cedar tree. Exact details of how or where Voss purchased this dugout on Vancouver Island are murky. There are six origin stories explored in MacFarlane and Salmon’s book. Ironically, as it turned out, they named it Tilikum, a word meaning friend in the Chinook language.

Conversion of the Tilikum into an ocean-going vessel was completed at Spotlight Cove on Galiano Island by shipwright Harry Vollmers, carpenter John Shaw and Voss. The traditional lines of the 38-foot long dugout canoe were decked-over, the sides built up by a half-foot, with a small cabin fixed on top.

Three masts with a full set of sails were sewn by the shipwright’s wife, nearly 400-lbs of lead weight were bolted to the keel for ballast and a newly carved figure-head by Luxton (his only contribution to the conversion) completed the work.

One man would sail while the other man rested. Voss would be captain. Luxton reserved the literary rights of the adventure and would serve as mate. The pair agreed to a half interest each so long as they maintained a position on the boat. They would split any profits made through static display, lectures or publications about their journey. These terms would prove highly contentious.

Voss and Luxton embarked on the Tilikum from Oak Bay near Victoria on May 21, 1901. With only a few miles under their keel, battling the currents and winds at the entrance to Juan de Fuca Strait, they were forced to take refuge in Sooke Harbour.

It was fortuitous. They discovered and repaired leaks for five weeks, embarking for a second time on July 6th. Voss soon discovered Luxton had fibbed about his abilities as a sailor. He would have to teach Luxton how to handle the Tilikum for the two men to maintain a proper watch.

Tight living quarters, unvaried diet and the clash of two strong personalities made for a perilous voyage for 58 days — until Luxton abandoned ship in Sydney, Australia, and never saw Voss again.

John Voss developed a showman’s skills and became a keen promoter of his venture, attracting hundreds of curious citizens wherever he went, generating excitement and sparking the imagination and courage in others — many who either joined him as mate or embarked on their own sea adventures.

At the end of the voyage, concluding in Margate, England, after nearly four years away, Voss was not greatly celebrated. He inexplicably abandoned the Tilikum and found his way back to Victoria. He resumed his hotel business briefly, worked as coxswain of the Quadra lifeboat, headed to Japan to take part in the fur seal-trade until it ended, found adventure with the Sea Queen and proceeded with the little-known voyage of the Tilikum II.

Back in Canada, Voss begun organizing his notes and even wrote to Luxton, asking if he could contribute his photographs from the trip, as well as supplying a portrait of himself. There is no record of a reply. When The Venturesome Voyages of Captain Voss finally did appear in 1913, it did not contain any image of Luxton.

Voss settled in Tracy, California, and died in obscurity in 1922.

During the winter of 1927-28, Luxton sat down to write his account ‘in answer’ to Voss? book, with an eye to correcting Voss’s ‘lies and deceptions.’ He made it clear there was no intent to have his story published; rather, he was recording his side of the story for the sake of his daughter, Eleanor Georgina Luxton who would eventually edit his notes and photographs, adding biographical sketches, and publish Tilikum: Luxton’s Pacific Crossing (Gray’s Publishing, 1971).

This latter account produced the loathsome characterization of Captain Voss — and his villainy — often referenced today: Voss is described as murderous, violent, drunken and pathetic.

Norman Luxton returned to Canada, married, and managed several businesses in Banff, as well as buying the Crag and Canyon newspaper. He became well-known amongst the Stoney Indians and was often hailed as ‘Mr. Banff’ in recognition of his entrepreneurial endeavours. He died in 1962.

According to Around the World in a Dugout Canoe, neither man recorded the journey faithfully. They conclude Voss’s account (including details of voyages undertaken in two other craft — the Xora and the Sea Queen) was likely the work of a ghost-writer or a very involved editor, so much so that much of the original language and flavour of Voss’s own version (from a copy of his original manuscript — and not the version that is widely published) had been altered and ‘gentrified.’

They claim the original version — the main source of much of Around the World in a Dugout Canoe — is much more interesting and colourful. Further clues as to the real characters of Voss and Luxton are provided by newspaper accounts from around the world, letters to the editor and personal journals.

The Tilikum was sold several times to a variety of interesting characters but was ultimately left to decay on the muddy flats of Bugby’s Hole near East Greenwich. Through a series of remarkable connections and coincidences, the Tilikum was finally retrieved from England in 1928 by the Vancouver Island Publicity Bureau and was partially restored through the combined efforts of the Thermopylae Club and the Victoria Chamber of Commerce.

After many years of open display at Thunderbird Park in Victoria, a more permanent — and controversial –exhibit was established inside the Maritime Museum of British Columbia in 1965. People have since traveled from around the world to view the sturdy dugout canoe that eventually completed — albeit in the cargo hold of the freighter Pacific Ranger — a round-the-world voyage.

The intent of Around the World in a Dugout Canoe is to set the record straight so that Voss, Luxton and the Tilikum can take their rightful place among the great seafaring stories of B.C.’s marine history alongside the Beaver and the St. Roch.