Water, not oil, is now the world’s most important resource. 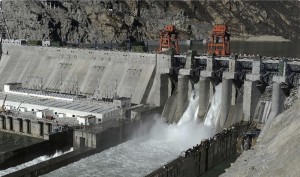 Zangmu Dam, on the Yarlung Tsangpo, east of Lhasa, is the first big dam on this river.

According to B.C.’s Michael Buckley, China is making the biggest water grab in history—stealing water from Tibet’s rivers for hydropower to be exported to power-hungry east coast mega-cities like Shanghai.

As Michael Buckley makes clear in his downloadable-only book, Tibet, Disrupted, the power being generated by China’s new dams will be used to accelerate the rampant exploitation of Tibet’s mineral and oil resources.

The Zangmu Dam, east of Lhasa, is 500 MW in output. Close on the heels of this one are five more dams on the river and its tributaries. This is causing much alarm in India and Bangladesh downstream, where the river is called the Brahmaputra.

Most of southeast Asia is threatened by the new Chinese dams. At the tail-end of the Ganges-Brahmaputra river system, for instance, sits Calcutta, a city of 16 million where water supply is erratic at best. In some districts of Calcutta, residents go out every morning  to fill vessels from water-truck deliveries.

Due to water shortages and extreme weather events in Asia, there could be hundreds of thousands of climate refugees. According to Buckley, China’s mega-dams and mega water-diversions on the rivers of Tibet are going to be a huge problem for food and water security in the nations downstream.

This material below is excerpted from Buckley’s digital photobook, Tibet, Disrupted, and reprinted by permission of the author.

Tibet, Disrupted is available for download on Apple’s iBooks Store

WATER, NOT OIL, is now the world’s most important resource. Though we live on a planet covered by water, very little of it is accessible.

More than 97 percent is seawater, which is too salty: at this point in time, desalination plants are very costly, in terms of both money and energy. Roughly another two percent of water resources are locked in ice and snow.

That leaves a paltry one percent to supply drinking water, grow crops, run factories, cool power plants, and handle all the other key roles that water plays. And it’s possible that up to half of that paltry one percent is polluted or contaminated water, which is not up to the task. As non-renewable groundwater resources are used up, the global supply of fresh water is dwindling at an alarming rate. This will lead to great tensions between nations over shared water resources.

Although there is fresh water deriving from the ice in the Arctic and Antarctic, most of it cannot be funnelled into usable fresh water for human consumption.

Tibet is often referred to as the ‘Third Pole’, because it is the third-largest source of water locked in ice and snow. Tibet is unique in the world as a mass provider of fresh water, via rivers, to China and to a dozen nations downstream.

Tibet is the source of major headwaters for the rivers of Asia, and additionally provides key tributaries or feeders for other rivers (such as the Ganges). There is no parallel to this situation anywhere else on the planet. We only have one Tibet: there are no backups, no second chances.

And yet this valuable store of water is under assault by short-sighted policies put in place by the People’s Republic of China. The building of scores of mega-dams to power mining exploitation of Tibet—and to supply China’s power-hungry mega-cities. This is just the tip of the iceberg—there are plans to divert Tibet’s water on a massive scale.

Already under way is huge exploitation of Tibet’s previously untapped groundwater, for export to mainland China. And meantime, the permafrost that underpins the Tibetan Plateau is also under assault, as it partially thaws due to scores of mining mega-projects under way.

Taken together, these assaults are tantamount to ecocide in the Land of Snows. Tibet’s rivers are mostly glacier-fed, with the lower sections fed by monsoon rains. The glaciers are melting rapidly due to climate change factors. Climate change is human-driven, and both China and India are major contributors to the rain of black soot and the CO2 emissions that are causing this meltdown.

China is far and away the world’s biggest dam-builder, having more dams in its territory than the rest of the world combined.

Now, with China’s rivers saturated with dams, Chinese engineers have turned their attention to Tibet’s powerful rivers. All of the rivers of Tibet are seeing major changes due to mega-damming. The one exception is the Salween River, which has yet to see a mega-dam built. The Salween is the last wild river of Asia. Xiaowan Dam on the Mekong River in Yunnan province is roughly the same height as the Eiffel Tower.

Adventure travel writer Michael Buckley has called the desecration of the Tibetan Plateau by occupying Chinese as a disaster of Biblical proportions. BC BookWorld featured a review of his book, Meltdown in Tibet (Raincoast $31.50), in its November, 2014 [Winter] issue.

With the arrival of the train in Tibet, large-scale mining of lithium, gold, copper, lead, crude oil, natural gas and other resources is under way to feed China’s voracious industrial sector.

None of this benefits Tibetans. In fact, mining pollutes drinking water and kills the livestock.  According to Michael Buckley, the degree of environmental damage is viewable on Google Earth.

In a nutshell, one way or another, over a billion people will be seriously affected by Chinese mining and megadams in the Tibetan Plateau—a figure that includes Chinese downstream on the Yellow and Yangtse Rivers (leading to Yangtse Delta and Yellow River Delta).

The major trans-boundary rivers that will be impacted by China’s dam-building and mining are the Mekong, the Salween (starting up with string of megadams now), and the Yarlung Tsangpo which runs from Tibet through Bangladesh and India (with start-up of five new megadams in Tibet, as well as extensive mining close to the river).

The subtitle of Buckley’s book is China’s reckless destruction of ecosystems from the highlands of Tibet to the deltas of Asia.

Canadian mining companies are complicit in the mining, pollution and environmental damage.

2 Responses to “Tibet, disrupted and desecrated”