This Stays in the Room 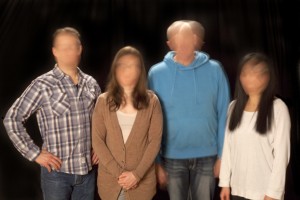 Even in this era of Edward Snowden, Facebook and selfies, you still retain some secrets; closely guarded aspects of your life that are deeply private; stuff that might be buried with you in the grave.

So what would happen if you and three other people—who are aren’t necessarily close friends of yours—agreed to share revelations that are generally reserved for psychiatrists? If you tossed in some photography, songs, video projections and choreographed sequences, just to obviate the confessional monologues but never to overshadow them, what sort of theatrical experience could you provide?

Directed by Mindy Parfitt (whose own stories are included), This Stays in the Room is a cooperatively-created composite of true, deeply personal stories that are mostly shameful, embarrassing or wounding in some lasting way, and yet resonate with the universality of our shared vulnerability.

Distinguished stage veteran Allan Morgan leads this troupe forward with his galvanizing presence, recalling how a cruel, childish remark prompted him to never take off his shirt again in public during his youth. He later graphically describes his first introduction to homosexuality as a teen, as well as the humiliating finale to a bizarre night-long tryst—being stuck at a bus stop on a Sunday morning, penniless, trying to get home to the West End—smeared with a white substance that was used when all that the romping in a private gymnasium ran out of lube.

Having ended a love affair with the bottle twenty years ago—also described—Morgan soars in this production as mature, kind-hearted presence whose spirit “fills the room.” Dressed in baggy jeans and suspenders, he is genial and wise and energetic. When all four actors are required to frantically make self-portraits with chalk for about one minute, Morgan’s physical fervour is infectious. The quality of the blackboard end-product is secondary to his willingness to abandon self-consciousness, to engage, to renounce insecurity.

This surprisingly wholesome show in the cooperatively managed Gallery Gachet at 88 East Cordova (just west of The Firehall Theatre) starts with the voice of a non-actor remembering being cross-eyed at age five, something his parents found to be “aesthetically displeasing.” Later we learn his parents once placed a ceramic egg in front of their sight-impaired son and laughed when he tried to eat it. He has never forgiven them.

That adult who was once given a ceramic egg, or Morgan who was taunted in his youth, are not seeking liberation from the past. The evening is not designed as a therapeutic exercise modeled on Alcoholics Anonymous. Rather it’s an exploration of how fascinating our secrets can be, how they can remain so long in our breasts like caged birds longing to be set free. The secrets become essential parts of who we are, and possibly we become attached to them, even dependent on them, because they have helped to make us into the original characters that we are. If they were all jettisoned, would be just anyone?

The funky gallery has some chairs decorated by its resident artists. On one of these creations is some tiny lettering that supplies the following quote from Gandhi, “The weak can never forgive. Forgiveness is the attribute of the strong.” Even as this show progresses, one ponders the affect of making the private public in this overt fashion. Is it unseemly? What is the function of shame in human beings? How is it that we can allow ourselves to be crippled for a lifetime by a simple embarrassment?

This Stays in the Room does not purport to have any deeply psychological underpinnings. It’s a smartly presented bazaar that allows the viewer to wander through the offerings, unscathed. Ultimately it’s the collectivity of the undertaking that lifts our spirits rather than the courage of any particular storyteller.

An unemployable immigrant, lacking a social insurance number for a year, sinks into depravity as a sex addict, seeing prostitutes. He loses his wife and child. He joins Sex Addicts Anonymous (yes, apparently there is such a thing). There is no moral to this story, only his oddly endearing final comment, “I still want to be a good guy.”

A daughter reprimands her dementia-addled father for his lies, her own unreasonable thinking twisted by frustration. He can be as daft as he wants in private, but the father has committed the public sin of stealing candies from the bulk section at Save-On Foods.

Again using the voice of a daughter, Manami Hara deftly relates the story of a father in Japan who suffers a brain aneurism while having sex with his secretary in a Love Hotel. After she has dutifully placed him in a care facility, she returns to Japan to find him gaunt and sickly in filthy conditions. An ulcer prevents him from eating. He must be moved into a psychiatric facility where he is tied to the bed. He eventually dies. “This haunts me,” she says, matter-of-factly.

A ten-year-old girl is abused by her fourteen-year-old brother. Life goes on. They grow up. He proves to be a poor father. “I find his narcissism nauseating,” she says. And yet their mother refuses to see what the daughter knows in her mind and in her body. The mother keeps everything on the surface; the daughter has never forgiven. And so families carry on.

Oddly one of the most intriguing revelations, from Robert Salvador, is the least pain-ridden. He recalls returning to the game of baseball, an activity he used to be good at, after a ten-year layoff. His re-acquaintance with the familiar actions required on a baseball diamond is strangely uplifting, like psychic medicine. “I know this guy….” he says. “… and I like this guy.”

Alexa Devine recalls another seemingly forgettable anecdote. As an harassed, pregnant mother of two, she is unable to cope. She calls her mother. The mother arrives, settles her two volatile children and expertly manages to make dinner. The pregnant daughter collapses on the sofa, granted precious sleep. That’s it. That’s all. It’s just a simple confession of insecurity, someone accepting help.

“We all try to walk forward together,” one of the four actors remarks, near the end. Indeed.

After seeing Helen Lawrence, this bare-bones, almost budget-less production of This Stays in the Room perhaps appears more sublime than it is—but we’ll take it. It’s a tonic, a relief, to see an intelligent evening of theatre that is truly, deeply human—both intimate and surprising, casual while retaining dignity.