It took the powerful collaboration of two women to transform a story of abuse into a state of grace. 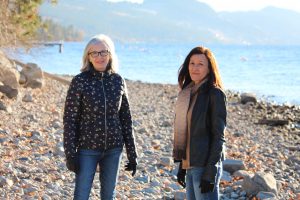 Janet Gallant, the wig-maker had a story to tell and poet Sharon Thesen had the creativity and sensitivity to work with her. Their resulting book of linked poems and images is a powerful survivor’s tale.

Imagine neighbours gathering during a hot, dry summer in a home high above Lake Okanagan to wait for a fire evacuation order. A wildfire bears down on them but they are hoping for the wind to change, for their homes to be cupped in the hands of a merciful God.

In the meantime, the hosts serve chips and salsa and wine. The hours tick by and two women begin a conversation that will continue for months, one that will change their lives and that will result in a remarkable book, The Wig-Maker (New Star $18).

One woman is the wig-maker, Janet Gallant, who works from home on her painstaking creations. Black and white photos of Gallant’s wig-making are featured throughout the slim book of connected poems that charts her journey overcoming a tragically abusive upbringing.

Gallant starts telling her life story to one of the wildfire party hosts, Sharon Thesen, who happens to be an editor and poet with a dozen books to her credit, no less than three of which have been nominated for the Governor-General’s Award. The two decide to work together on a book about Gallant.

“I remember how easy it was to talk to Sharon. There was no small talk. I can’t explain it, my heart trusted her heart,” says Gallant.

“I could not, would not, try to write it in the third person,” says Thesen. “Janet’s telling was going to compose the entirety of the text — her telling processed through my ears, my heart, my hands.”

Janet Gallant’s life story to date is about surviving as the daughter of a black, mentally ill woman who abandoned the family when Janet was three years old.  Gallant and her siblings were left in the care of their father: a white, poorly educated, binge-drinking soldier who found ways to physically, sexually and emotionally abuse his children and future adult partners.

Doreen, another black woman with a young daughter of her own, answered his ad for a ‘housekeeper’ and moved in as a stepmother. Doreen was the kind who ignored blatant child abuse happening right in front of her. So, these poor kids were, in a sense, abandoned yet again by a mother figure to the miseries of life with a monster.

No faraway family intervened. No concerned friends stepped up on behalf of these children. The frequent transfers of army life mitigated against any sort of outside investigation by social agencies outside the military bases of that era.

Gallant’s story is about wanting to find a way to remember her brutalized older brother, Billy, who committed suicide just before his fourteenth birthday after a particularly horrible beating. It’s about finding a way to memorialize her older sister Penny who absorbed the worst of the sexual abuse from the erstwhile father but this did not shield the two younger daughters for long.

Gallant’s story also leads us to her kind young husband, a best friend, confidante, and father of her two beloved daughters to whom this book is dedicated. Tragically, Gallant’s husband is struck down by the ticking time bomb of a hereditary condition.

The autoimmune disorder of alopecia then claims Gallant’s glorious African mane of hair within the next six years. Ill-fitting wigs bought off-the-rack only add to the discomfort of this inner/emotional and outer/physical health condition.

After working in Calgary businesses as an executive assistant for twenty-five years, Gallant takes up the near-solitary world of wig-making. By knotting up to 80,000 hairs in singles, doubles and triples to create one transformative wig, Gallant contemplates larger life issues yet again. She wants to find family members. She wants to know the truth; she wants photos and any stories family members may or may not choose to share.

She is rejected countless times in this search but Gallant is made of tough stuff and she persists in her search, including DNA ancestry sources. These investigations are included in Gallant’s and Thesen’s memoir-poem, ultimately leading to a mysterious healing process through the telling itself.

Janet Gallant found Sharon Thesen by chance. Thesen’s husband, Paul, and Jim, Janet’s current life partner both love to cycle year-round, solid bicycling buddies. At the time of the threatening wildfire in 2017 however, Sharon and Paul were aware that Jim was away on business in Alberta and Janet Gallant was on her own. So, although they don’t know Gallant well, she is the first of the neighbours to be invited down to wait out the wildfire among friends and acquaintances.

It proved to be fortuitous as Gallant had been searching for the right person to tell her story to. Fortune had led her to a master poet with an acutely sensitive ear for language, its rhythms, its hesitations and how an empathetic soul might be a skilled conduit to transfer those lines of speech and the heart-breaking stories therein to the page. Gallant and Thesen’s conversations take place over the next two and a half years.

A line from The Wig-maker describing the storytelling, alludes to a form of grace that Gallant so deservedly finds: “The music is indeed here. Lyrics of truth, and notes of healing, are there….You and Sharon are singing together.” 978-1-55420-171-6

One Response to “The Wig-maker’s story”