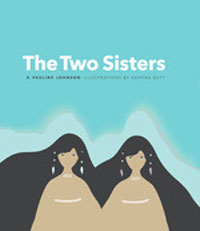 Sandra Butt’s illustrations are paired with the first individual publication The Two Sisters (Waterlea Books $19.95) retold by First Nations poet and author E. Pauline Johnson. An origin story of the Lower Mainland’s geographical sights and a tale of peace that has inspired generations, capsule The Two Sisters is an important piece of West Coast lore. Originally published in Johnson’s Legends of Vancouver, capsule The Two Sisters shares the journey of two girls who bring two warring tribes together through the sharing of food, music, and friendship in celebration. The Sagalie Tyee (Creator) notices the friendship the sisters facilitated and to reward the girls he immortalizes them as mountain peaks, what we now see on the horizon at Capilano.

Sandra Butt is an illustrator and designer and has a background in education and design. She has won awards for her work in educational puzzles for children from the Canadian Toy Testing Council and American Parents’ Choice®. She is based on Pender Island, B.C. 978-0-9949997-1-9

Pauline Johnson is widely accepted as the starting point for aboriginal writing in B.C. although she never learned to speak an aboriginal language and most of her poetry was not about First Nations people.

As of 1895, Emily Pauline Johnson or “Tekahionwake” toured extensively, often wearing European clothing for one half of her performances on stage and “Indian” clothing for the other half. Historian Daniel Francis has suggested in The Imaginary Indian: The Image of the Indian in Canadian Culture (1992), that the “need to satisfy the demands of a White audience stultified Pauline Johnson’s development as a writer and limited her effectiveness as a spokesperson for Native people.” She is mostly remembered for her poems “The Song My Paddle Sings” and “The Legend of the Qu’Appelle,” as well as Legends of Vancouver (1911).

When visiting the West Coast, Pauline Johnson usually stayed at the Hotel Vancouver. Increasingly troubled by ill health, she announced before an appreciative audience at the Pender Auditorium in 1909 her intention to live permanently in Vancouver. She took an apartment at 1117 Howe Street and concentrated on her writing, increasingly turning her hand to essays and short fiction.

In 1910, Johnson began publishing prose pieces in the Saturday Province Magazine, edited by Lionel Maskovski, and these stories led to Legends of Vancouver (1911). It contains her versions of stories told to her by Chief Capilano and Mary Capilano of the Squamish Band, including the well-known story “The Siwash Rock” about the rock in Stanley Park near Lions Gate Bridge. Pauline Johnson wanted their collaboration to be called “Legends of the Capilanos.” Unfortunately she did not get her wish and Joe and Mary Capilano are rarely, if ever, credited as First Nations authors.

A follow-up volume, Flint and Feather (1912), combining poetry from her first two books, has proven to be one of the most reprinted poetry collections in Canadian history, rivalling the works of Robert Service.