Four Faces of the Moon 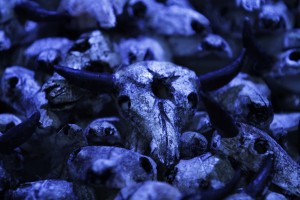 A multi-media installation based on her new stop-motion animated short film, Four Faces of the Moon is told in four chapters via sets and puppets and explores the reclamation of language and Nationhood and the layers of Canada’s colonial history. Connecting the oral and written history of her family as well as the history of the Michif (Métis), Cree and Anishinaabe people and their cultural ties to the buffalo, Strong tells the story through her eyes. This story seeks to uncover the history of the extermination of the Buffalo and establish the importance of cultural practice, resistance and language revival from a personal perspective. Amanda Strong is an Indigenous filmmaker, media artist and stop-motion director currently based out of the unceded Coast Salish territory also known as Vancouver. Amanda’s work explores ideas of blood memory and Indigenous ideology She is the owner and director of Spotted Fawn Productions, an animation and media-based studio creating short films, commercial projects and workshops. Amanda’s productions collaborate with a diverse and talented group of artists putting emphasis on support and training women and Indigenous artists. Her films Indigo and Mia’ have screened internationally at Cannes, TIFF, VIFF, and Ottawa International Animation Festival.

Four Faces of the Moon is made possible with the support of the Canada Council for the Arts, CBC, Telus, BC Arts Council, Creative BC, Ontario Arts Council and the NFB Filmmakers Assistance Program.