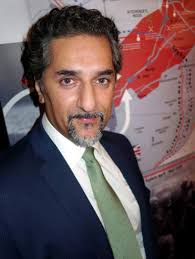 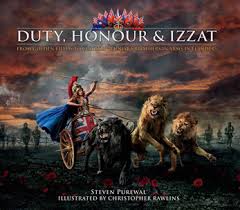 “After 100 years, it is time to tell the tale of the unsung heroes of the Punjab who stood as brothers-in-arms with Canadians to make a critical contribution to Allied victories in the First World War,” writes Steven Purewal, author of Duty, Honour & Izzat: Golden Fields to Crimson – Punjab’s Brothers in Arms in Flanders (Renegade Arts Entertainment $29.99).

His multi-faceted, multi-centuried tribute to the bravery of Punjabi militia, lavishly illustrated by Christopher Rawlins, is a far-reaching, coffee table-style hardcover book that has been issued from Alberta.

Framing the history is a graphic novel about a teenage boy, in Surrey, B.C., caught up in drug gangs. The teen re-thinks his choices after his 95-year-old great grandfather comes to visit the family in Canada. The grandfather’s stories of their past, as well as his reunion with a Canadian soldier he saved during World War II opens up a different path to the teen’s life journey. 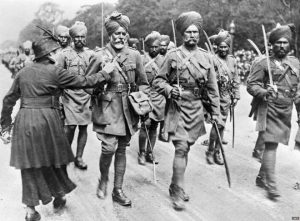 A woman pins flowers on a Sikh soldier at a march-past of Indian troops during WW 1.

In addition to Punjabi contributions to ‘the war to end all wars,’ Purewal also outlines other campaigns in which Punjabis helped Great Britain expand and defend its empire, earning a reputation of loyalty and effectiveness. Purewal calls these campaigns across the empire: the “brotherhood of the bold.”

Purewal translates historical letters from Urdu to English including one  from the impassioned Risaldar Dayal Singh, 6th Cavalry in 1917, who wrote, “Our regiment was in the forefront of the attack, and so was my squadron… The fury of our charge and the ardour of our war cries so alarmed the enemy that he left his trenches and fled. At first we were assailed by machine gun fire like a rain storm from left and right, and afterwards from the front, but how could the cowardly Germans stand before the onslaught of the braves of the Khalsa!” 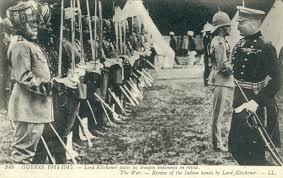 Lord Kitchener with the Indian Contingent at George V’s Coronation in 1911. By 1914, the Indian Army drew half its recruits from the Punjab. Photo: Illustrated London News.

Purewal also quotes a British aristocrat praising the Indian forces: “The landing of the two Indian Divisions, numbering 24,000 men on the quays of Marseille in September and October 1914, was a great event, not merely in the annals of the Indian army but in the history of mankind,” said Lord Curzon, Viceroy of India, in 1917. Clearly, the Punjabi soldiers and other members of the Indian Army were respected and admired during the British Empire days.

Steven Purewal is a community historian, curator and Managing Director of Indus Media Foundation, a society based in the Lower Mainland that seeks to foster an appreciation for Punjabi culture within the wider community. Purewal’s work has been featured at The National War Museum, Provincial museums, municipal venues and the Prime Minister’s Reception for the Komagata Maru Apology in Ottawa.

In the introduction to this broadly researched and illustrated book, Purewal questions why “these imperial subjects would raise their battle cries in a land far distant from their own and for an emperor not of their kin.” He credits the character of British officers and the “Martial Races” they commanded.

One Response to “The Martial Races”