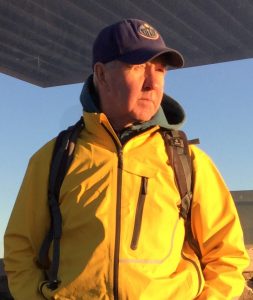 George Mercer’s fourth novel, Fat Cats, has won a Gold Medal in the Best Regional Fiction (Canada West) category of the 2019 Independent Publisher Book Awards and his Dyed In the Green series won a Silver Medal in the overall Fiction Series category.

George Mercer’s Fat Cats, set in B.C., is about park warden who “goes rogue.” When a cougar shows up on one of the Gulf Islands, a group of neighbouring landowners want to see the cougar tackle the overpopulation of deer on the island–but the cougar is shot and killed. Frustrated, park warden John Haffcut takes matters into his own hands and puts a cougar back onto the island. Then he has to deal with a notorious cougar tracker who is intent on killing it.

As a Gulf Island National Park’s monitoring ecologist, Mercer is familiar with the challenge of maintaining native ecosystems in the absence of predators. “Before I retired,” Mercer says, “I was often asked what I was going to do with all my spare time. I used to joke that I was going to do exactly what John Haffcut does in Fat Cats.”

After crossing Canada, the series will make a stop in an African national park before continuing East and concluding where it began in Cape Breton.

A spate of books has lamented the deterioration of our national and provincial parks, from Switchbacks by Sid Marty (1999) to Dale Portman’s The Green Horse (2017). They are part of a much longer tradition of overtly conservationist writing in Canada, from Roderick Haig-Brown’s The Living Land (1961) to the work of Farley Mowat.

This time Mercer uses the beauty and natural bounty of little-known Sidney Island within the Gulf Islands National Park Reserve as the site and metaphor for dilemmas that arise when one mixes parks, environment, wild animals and human habitation.

That title, Fat Cats, is a teaser, as Mercer once more presents the dilemmas confronted by park wardens when conservation versus development issues arise. A cougar—the fat cat—has made its way to Sidney Island and is killing families of deer. Meanwhile there are also human fat cats afoot who are keen to place real estate values ahead of the natural environment. Park warden John Haffcut, fresh from clashes in Jasper National Park, must decide which predator is most worthy of protection.

The other main characters include a cougar mercenary versus a cougar tracker, a park superintendent, Indigenous leaders, politicians, wealthy landowners, park bureaucrats, an ex-military man and a widowed beauty of the human variety.

Fallow deer are taking over Sidney Island and wreaking havoc with plants and private gardens. How should these deer be culled? And how can the indigenous blacktail deer population be revived? Is hunting the way forward? Or will a cougar do the deed now that a cougar has swum across from nearby Vancouver Island?

John Haffcut emerges as a sort of environmental Sherlock Holmes, trying to solve the mystery of how to bring calm to the island. Questions arising from the death of an affluent landowner mount in intensity and the main actors on the stage collide and cooperate for different reasons. “Who is hunting whom?”

Fat Cats probes, in intricate detail, layered motivations, temperaments and ambiguous external challenges. The reader is drawn, page by page, to the nail-biting end of the novel as John Haffcut’s principled yet conflicted journey culminates in an unexpected ending

I’ve been lucky enough to have read the first three books in this series and I join other expectant readers in anticipating future volumes. Rare are the writers who weave together an obvious concern for the parks and conservation in a national and grand manner. George Mercer deserves to be recognized as one of them.

Born in Gander, Newfoundland, George Mercer worked for 35 years as a park warden, starting in 1979 at Newfoundland’s Terra Nova National Park and ending in 2012 as monitoring ecologist at the Gulf Islands National Park Reserve. In between, he worked at Cape Breton Island, Fundy, Wood Buffalo, and Jasper national parks.

“I’ve worked on everything from reintroducing American marten to Terra Nova Park, to peregrine falcons in Fundy, to woodland caribou in Jasper,” Mercer told the Victoria News. “I look at small places like the Gulf Islands as a beachhead for conservation. It provides a land base and marine area where you can get the message out about the importance of conservation and living on the planet with a gentler hand.”

Ron Dart has taught in the Department of Political Science, Philosophy, and Religious Studies at University of the Fraser Valley since 1990. He was on staff with Amnesty International in the 1980s. Dart has published more than 35 books, his most recent being Erasmus: Wild Bird (Create Space, 2017) and The North American High Tory Tradition (American Anglican, 2016).