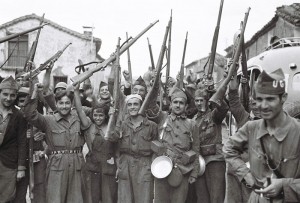 With the retrieval of a suitcase, Spanish Civil War photographer Alec Wainman of B.C. can finally be recognized as a great humanitarian.

Alex Wainman has emerged posthumously as a highly significant Spanish Civil War photographer after his son and co-author Serge Alternês has arranged for the publication of 240 b&w photos from a long lost cache of 1,650 photos for Live Souls: Citizens and Volunteers of Civil War Spain (Ronsdale $24.95).

Some forty thousand volunteer soldiers from 50 countries came to fight for the Republic of Spain prior to World War II. The largest contingents of civilian support came from France, Germany, Italy, Yugoslavia, Britain, USA, Canada, Latin American and Bulgaria.

In Live Souls, which also contains Wainman’s unfinished memoir of the Spanish Civil War as a non-combatant, Serge Alternês is tactfully circumspect about how his father’s photos were finally found and retrieved. Trains were used to evacuate the wounded.

The archive, stored in a suitcase, was rescued by Jeanne Griffiths from the home of a retired and since deceased Soho publisher. Oddly, a more famous cache of photos was similarly retrieved in 2007 from a long-missing suitcase—the 4,500 Spanish Civil War negatives of photos on 126 rolls of film taken by Robert Capa, Gerda Taro and Chim (David Seymour) and published in the well-known volume, The Mexican Suitcase, also the subject of a 90-minute documentary film.

Born on March 11, 1913 in Yorkshire, U.K., Alexander Wheeler Wainman came to Vernon, B.C. at age seven with his three brothers and his mother, widowed by World War I. In 1928, the family returned to Britain where he studied Modern Languages at Oxford, receiving an M.A. in Russian and Italian.

In 1934 and 1935 he worked at the British Embassy in Moscow and became dismayed by Western Europe’s ignorance of the dangers posed by the rise of Nazism. Concerned that Hitler and Mussolini were supporting Franco’s nationalists in Spain, he volunteered at age 23 for service as an ambulance driver for the British Medical Unit that went to Spain soon after the Spanish Civil War broke out in July of 1936. LINCOLN BATTALION: One-third of the 2,800 volunteers from USA didn’t return.

Back in Vancouver, Wainman taught at UBC’s Department of Slavonic Studies from 1947 to 1978. He mostly kept quiet about his involvements in Spain, sharing his memories with only a few friends and anti-war sympathizer George Woodcock, with whom he collaborated for a CBC documentary.

In the mid-1950s, Alex Wainman purchased a 90-acre property on the Okanagan lakefront and sold it in the late 1980s. This accounts for the street name Wainman Cove, 700-metre roadway on the west side of Okanagan Lake, near Fisbee Creek, north of Fintry and south of Whiteman Creek. Wainman and his family built the two original breakwaters that created a larger cove.

The whereabouts of Alex Wainman’s photo collection remained unknown to his son for forty years. Only about two dozen images had been published, a few becoming icons of the period. Some are exhibited at the Imperial War Museum in London. The photo archive in total had fallen into unscrupulous hands after Wainman had consented to a publication offer in London, England, back in 1975, the year Franco died.

ARAGON FRONT: The Republican militia had no formal uniform. There were few helmets to go round.

4 Responses to “The English suitcase”