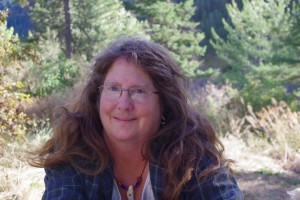 With its year-round population of ten, Echo Bay on Gilford Island is the hottest literary hotspot of B.C., boasting four authors with a total of nine books.

The newest title is a second collaboration between Echo Bay pioneer Bill Proctor and Echo Bay artist Yvonne Maximchuk, Tide Rips and Back Eddies: Bill Proctor’s Tales of Blackfish Sound (Harbour $24.95).  She and Proctor are promoting their book this month, as well as copies of their previous collaboration, Full Moon, Flood Tide: Bill Proctor’s Raincoast (Harbour, 2003), Maximchuk’s previous title, Drawn to Sea, and a one-hour audio book of selected readings from Tide Rips. B.C.’s leading opponent of fish farming, Alexandra Morton, lived at “Billy’s Bay” from the mid-’80s until 2007, raising her son and daughter on a floathouse and conducting maritime research. Morton first rose to prominence as the author of Siwiti: A Whale’s Story (1991), winner of the Sheila A. Egoff Prize for Children’s Literature.

After her husband died while filming whales, Morton remained at Echo Bay and took a job as a seasick, greenhorn deckhand on Billy Proctor’s fishboat, Twilight Rock, leading her to co-write his memoir, Heart of the Raincoast: A Life Story (1999), about the lives of Billy Proctor and his parents. Morton’s autobiography, Listening to Whales: What the Orcas Have Taught Us (2002) was followed by a co-authored anti–fish farming compendium, A Stain Upon the Sea (2004), winner of a Roderick Haig-Brown Regional Prize, and Beyond the Whales: The Photographs and Passions of Alexandra Morton (2004). After her orca research, she has concentrated on examining and publicizing the affects of farmed salmon on wild salmon.

Now Maximchuk’s own memoir, Drawn to Sea: Paintbrush to Chainsaw, Carving out a Life on BC’s Rugged Raincoast (Caitlin Press, 2013) has been followed by a second collaboration, Tide Rips and Back Eddies: Bill Proctor’s Tales of Blackfish Sound.

As a single mother of two in White Rock., Maximchuk fell in love with a crab fisherman who fished at Boundary Bay. She and her children moved with him to Echo Bay where there was no running water, electricity had to be generated and the closest grocery store was two hours away by boat. She cleared land and helped build a homestead off the grid, befriending Proctor and gaining access to his trove of stories.

Fisherman, trapper, logger and all-round West Coast guru Bill Proctor is the authority on the Broughton Archipelago—the area between northern Vancouver Island and the mainland that’s named after Captain William Broughton who accompanied Captain Vancouver in the 1790s. Proctor’s colourful Full Moon, Flood Tide: Bill Proctor’s Raincoast describes the archipelago’s history, wildlife, harbours, moorings, peculiar local terms and customs, and its most memorable characters such as Fritz Salem, renowned for making the best ‘corn likker.’  The new collection of stories, Tide Rips and Back Eddies takes off from where Full Moon, Flood Tide left off.

Nikki Van Schyndel recently took up residency on Bill Proctor’s land after releasing her memoir, Becoming Wild (Caitlin, 2014), about her year-and-a-half living in the Broughton Archipelago, foraging for food and making tools from cedar and bone the way the First Nations people used to survive.