Growing up on the heavy side of weight norms comes with a lot of social problems but it can also be character-building. 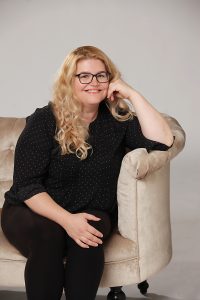 A new collection of non-fiction stories from 26 plus-sized people tells how they navigate a society obsessed with thinness, including some who developed important life skills while growing up “big.”

As a young girl, Christina Myers was used to hearing people describe her body shape as ‘solid.’

She wasn’t intimidated or ashamed by such remarks – not initially.

“I was solid,” she says in BIG: Stories about Life in Plus-Sized Bodies (Caitlin $24.95). “Strong and tall and built in a way that made me feel capable of anything I wanted or needed to do. I was the girl who could reach the top shelf and open jars and help teachers carry heavy boxes and outpace boys on the track and the tennis court.”

Myers says she felt ‘at home’ in her own body although this wasn’t to last.

“In a world in which controlling and perfecting our bodies is the most important job, project, obsession and goal that a woman can have, it would have been impossible to reach the end of childhood feeling as benign and neutral about a word like solid as I did in the beginning.”

At first, Myers made jokes. “‘I’m sturdy,’ I’d say, usually with a wink or chuckle. ‘I’d have made a great farm wife — big child-bearing hips, strong enough to pull a plow, I’d just work hard all day toting water and chopping wood.’ It was a false front: a feigned implication that I embraced my body, under the guise of vague words and a dash of humour.”

A friend called her on it. “The way you say that is not kind to yourself,” they said. “You don’t mean it in a good way.”

From that time on, Myers began to think about how words affect people, their self-image, confidence and well-being. “So what words, then, should I use? What words should any of us use? It is not an uncommon question these days, but the decision is ultimately so personal that I’m not convinced there is a right or best answer.” 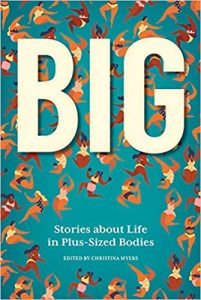 While compiling the 26 stories for reflections on the experiences of ‘plus size’ women (who may also be non-binary and trans people) in a society that values thinness, Myers opted to title her book, Big — not fat, curvy, chubby, ‘rubenesque’ or even sturdy.

“Big is a simple word, with complicated implications,” she says.

The stories include expected themes such as bullying, difficult relationships, poor self-image, and challenging health care. And then there are the unexpected stories, like that of Leyla Cameron who grew up in a straight-talking family of health professionals who got on the topic of eugenics one day.

Cameron asked whether or not it was “morally acceptable — even desirable — to detect so-called ‘deficiencies’ during pregnancy?”

After discussing the controversial topic of ‘designer babies’ Cameron went further, wondering “if they had known how being fat would affect my life, would they have taken the opportunity to deselect ‘fat’ from the panel of characteristics possessed by the little embryo that was to be me?”

Cameron was shocked when they answered they absolutely would, but understood they knew that being fat had been a source of a lot of pain to her growing up; that they would have done what they could to protect her from that.

Cameron acknowledged that, “being fat had also shaped almost everything about me,” but added that her “sense of humour, compassionate nature, radical politics and values would all be different, I was sure, if I hadn’t moved through the world as a fat person.” In the end, Cameron embraced her body shape.

Another contributor, Tracy Manrell discovers while going through a sex change from female to male how much difference there is between being overweight as a woman and as a man. “Although I always observed that life as a big man seemed different than life for big women, I was struck on a new level just how different these worlds are,” she says. “Women and men have different definitions of a fat body, I observe. Women are much harder on themselves. A woman sees herself as fat when carrying an extra ten or even five pounds. A man with those same extra pounds (and more) sees it as muscle or brawn on their bodies.”

Manrell encounters a doctor who doesn’t like the word ‘fat because she sees it as an insult and won’t allow its use in her office. Manrell doesn’t agree.

“The queer community is famous for reclaiming words that have historically been used against us: queer, dyke, fag, tranny. Used by the right people and in the right context, these words carry their own positive power. And they are just words — adjectives, descriptors. Frankly, there was a long time when if someone called me a fat dyke, I could say, Yes. Yes, I am. Fat and (for now) a dyke. What’s your point? So, when I call myself fat, I am not putting myself down. I am fat. I wear glasses. I have brown hair and a brown beard. I am transgender. And none of this is inherently bad.”

Ultimately, the use of words is what drew Christina Myers to this book project. She says it is her hope that readers will ask questions about the way they think and talk about their own bodies and other people’s bodies, about the world we live in and its lessons and obsessions, and about the words we use and how they shape us.