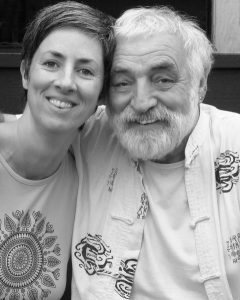 Between 1986 and 2011, the aptly named Derek Walker Youngs devoted much of his life to peace, leading to his posthumous book, Walking to Japan: A Memoir (Tellwell Talent unpriced), completed and co-written by his widow and co-walker. Born on June 16, 1940, during a World War II air raid, at age 45 Youngs participated in the Great Peace March for Nuclear Disarmament across the U.S.A. — a naive but determined, nine-month commitment to walk almost 6,000 kilometres from Los Angeles to Washington D.C. to spread the message of global disarmament and a ban on nuclear weapons. He subsequently founded the Peace Walker Society, eventually walking more than 25,000 kilometres in 25 countries. Like the classic Fool in the Tarot pack, the Galiano Island-based healer (who later lived on the Sunshine Coast and in Victoria), walked “in trust and faith,” usually not knowing where he would sleep or find his next meal. He succeeded in walking across Canada in two stages, in 1988-1989, during which time he added the middle name Walker, as suggested by friends. Youngs sometimes gained media attention while sharing his own stories of love and learning with people; but mostly he was solo and unheralded. First wed at age twenty in 1963 and separated in the early 1970s, he met a yoga and Reiki teacher,  Lani Kaito, eventually embracing the experimental West Coast lifestyle of Buddhism, Hinduism, meditation and massage, and together they founded the Integrated Health Centre. His increasingly alternative beliefs and practices led him later to a deep and enduring marriage to Linda Ward, a doctor of Traditional Chinese Medicine. They stayed together until her death in 2007. Thereafter, in his 60s, Youngs walked with, and eventually married, Carolyn Affleck Youngs, a photographer who has lovingly completed his collection of stories and ideas. Her own pilgrimages with her older “mentor, collaborator and best friend” included the Camino de Santiago de Compostela in northern Spain and the 88 Temples in Japan. They had four marriages ceremonies around the world in 2010 prior to his death on March 18, 2011 when she was 45. Having walked “all the city streets of Vancouver,” Carolyn Affleck Youngs [in photo] has plans to walk across the country one day, as well as the length of the Britain, from John O’Groats to Land’s End. 978-1-77302-273-4