“I am here because, in World War II, the Americans and Canadians helped us.” – Margriet Ruurs 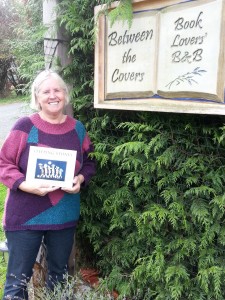 On a chilly and overcast October morning, as the Skeena Queen pulls into Saltspring’s Fulford Harbour, Margriet Ruurs is waiting at the dock, herself just back from another trip.

Ruurs is what you might call an internationalist. In another week she and her husband will visit Spain for three weeks, then it’s onto Qatar for two weeks, where Ruurs will speak to students at ten different schools; then it’s onto Saudi Arabia: more schools, more children, more stories.

At her Book Lover’s B&B operated with her husband, Kees, as she makes poached eggs on English muffins in her light-filled kitchen, Ruurs explains the origins of her children’s book, Stepping Stones (Orca $20), another foray into the world far beyond her idyllic Gulf Island life.

Browsing Facebook one day, she stumbled on a number of photographs of stone arrangements by a Syrian artist: A delicate stone mother holds a tiny stone baby; a downcast father heaves a heavy load behind them. Small stone figures are running for safety as bombs fall overhead. They are migrants.

Captivated, Ruurs set out to contact the artist who could generate such heart-rending images from mere pebbles. The artist, Nizar Ali Badr, was telling the stories of his people, forced to flee a land besieged by civil war, struggling to cross borders with their families and health intact.

Badr had no telephone or laptop. When eventually contacted, he agreed—through translators—to collaborate with Ruurs on a children’s book that would bring his work and stories to a broader audience. For a publisher, Ruurs found Orca Books founder Bob Tyrrell who was already hip-deep into bringing a refugee family to Canada with his wife, Avril. One dollar from the sale of each book would go to supporting refugee resettlement organizations across North America; Ruurs would donate her royalties in their entirety.

Ruurs was intentionally spare in her storytelling for Stepping Stones, leaving geography out of it and focusing instead on the plight of all those who are forced to flee their home countries, with translation assistance from Falah Raheem.

With only what they can carry, Rama and her family flee their once-peaceful village to escape civil war. Including her grandfather and brother, Rama’s family is hoping to walk to freedom in Europe.

“I wanted to make the story more universal,” says Ruurs. “These stories of refugees, their experiences — it’s always happening somewhere. Two years from now, in another part of the world, the story will be the same.”

Even though Stepping Stones has emanated from the grim plight of Syrians, it does so in a hopeful, forward-looking way. Despite the harsh realities of refugees meeting with closed borders, chain-link fences and overcrowded camps, Ruurs chose to leave the ending light.

“I wrote it for my grandson,” she says, “as a way of sharing with him my message that we need to help each other. I am here because, in World War II, the Americans and Canadians helped us. Countries that are currently living in peace need to help others that are not.”

Margriet Ruurs was born in the Netherlands in 1952. She learned English at age nineteen.  Since her arrival in Canada in 1977, she has lived in California, Oregon, Northern Alberta, Kananaskis Provincial Park, the Yukon and the Okanagan. She came to B.C. in 1990.

Around the turn of the century, Ruurs created an online magazine for children in which they share their own stories and poems. Conceived as an online project for her Masters of Education from Simon Fraser University, Kidswwwrite has attracted submissions from children all around the world.  In 2014 she received an honorary fellowship from Okanagan University in Kelowna for her volunteer work on this project. 9781459814905