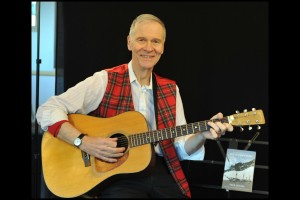 Tim Rogers moved from Calgary to Victoria in 2014. An accomplished musician who performs songs from Newfoundland, he became intrigued by the story of the disappearance of the sealing ship, Southern Cross, while studying the folklore and music of Newfoundland. Rogers found several ballads and wrote several academic articles about the tragedy that resulted in 173 crew members being lost at sea). “These articles failed to quell the growing need to tell the human side of this great story,” he says. This gave rise to his novel, The Mystery of the SS Southern Cross, inspired by the mysterious sinking of the SS Southern Cross off Newfoundland’s southeast coast in 1914. A music CD accompanies the book. As a fundraiser for the 2015 Sidney and Peninsula Literary Festival, Tim Rogers will perform songs drawn from Newfoundland tradition that touch on the times and setting of his new novel,