Shore to Shore to Gallery 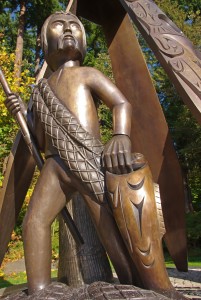 In Shore to Shore: The Art of Ts’uts’umutl Luke Marston (Harbour $26.95), Suzanne Fournier tells the story of one of the first pieces of Coast Salish art to be installed in Stanley Park and the artist, Luke Marston, who created it. The sculpture honours Marston’s Portuguese and First Nations ancestry and family history in Coastal BC. Fournier and Marston (who is the great-great-grandson of Portuguese Joe Silvey and Kwatleematt) will be joined by other members of the Silvey family in celebrating the launch of the book at the Bill Reid Gallery (639 Hornby St., Vancouver) on November 29 at 2pm. This free event is open to the public. The Shore to Shore sculpture was conceived out of a need to honour Marston’s First Nations and Portuguese ancestry and family history in Stanley Park. In it, Joe Silvey, Khatlinaht and Kwatleematt are surrounded by the tools of their trade: a seine net (Silvey was the first to take out a seine fishery license in BC); fishing net needles; a short throw net; and a whaling harpoon. Silvey is holding a spring salmon by the gills, representing the industry that allowed the family to thrive. The trio stands under a cod lure, which was used by First Nations. Each of the three fins of the lure is carved with the symbols and crests that represent the three figures.

In telling the story of this monumental sculpture and Marston’s art, Suzanne Fournier combines interviews, research and creative non-fiction narration. She recounts Marston’s career, from his early beginnings carving totems for the public at the Royal BC Museum, to his study under Haida artist Robert Davidson and jewellery master Valentin Yotkov, to his visits to both his ancestral homes: Reid Island and the Portuguese Azores island of Pico—journeys which provided inspiration for the Shore to Shore statue. Fournier also outlines the significance of the statue itself, and in doing so weaves together a rich and fascinating history. Food and refreshments will be made available, courtesy of the Consulate of Portugal.