Shenanigans on an unnamed isle 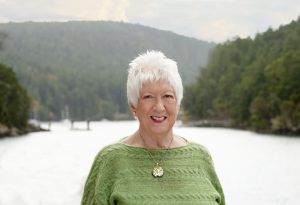 Pat Carney will be promoting her first fiction collection–available in April–at the Sunshine Coast Festival of the Written Arts in August. Her first interview will air on CBC Radio’s the Next Chapter with Shelagh Rogers on April 10, and she will have an event at Bolen Books in Victoria in late April. Born in Shanghai, Pat Carney worked as a business columnist for the Vancouver Sun and The Province before moving to Yellowknife in 1970 to run a consulting firm. Later elected as a Progressive Conservative MP in Vancouver Centre, then promoted to Cabinet as Minister of Energy, Mines and Resources, she became Minister of International Trade and was named President of the Treasury Board in 1988. She was instrumental in negotiating Canada’s so-called Free Trade agreement with the United States. In 1990 she was called to the Senate from which she retired in 2008. She is the author of Trade Secrets: A Memoir (Key Porter Books, 2000). She has long lived on Saturna Island in B.C. where she began to hit her stride as writer, producing amusing personal essays and stories about local manners and matters. A contributor to the Vancouver Sun op-ed pages, she eventually published a collection of fiction, On Island: Life Among the Coast Dwellers (Touchwood $21.95), in which she describes events, attitudes and behaviours on an unnamed Gulf Island. Also, according to her website: “As an educator, she was a Canadian pioneer in the development of distance learning systems and in 1977 she received the British Columbia Institute of Technology award for Innovation in Education for “diligent and creative work” in the Satellite Tele-Education Program Hermes Project, one of 26 national projects to experiment with the world’s first geostationary interactive communications satellite.

“She was the first woman in every post she held, including first woman finance critic. She was the first woman appointed to the senior economic cabinet posts of Minister of Energy, Mines and Resources; Minister of International Trade; and President of Treasury Board in the cabinet of Prime Minister Brian Mulroney (1984-1988).  She was also a member of the Cabinet Committee on Priorities and Planning, and the Minister Responsible for the Asia Pacific Initiative. 9781771512107