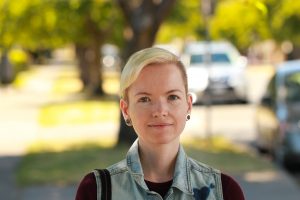 Nicola Peffers has emerged as the lead plaintiff in a class-action lawsuit filed against the Canadian Armed Forces by a collection of sexual trauma survivors. Peffers had left the Canadian navy five years earlier after five years of service at the rank of Ordinary Seaman.

In her memoir, Refuge in the Black Deck (Caitlin $24.95), she describes feeling isolated and threatened aboard the HCMS Winnipeg, often taking refuge by hiding in the black deck, a dark and cramped area of the ship that nobody else wanted to visit. At age 26, having graduated near the top of her training class, she had optimistically boarded the ship in 2009, only to soon discover she would be mistreated by superiors and sexually harassed.

After years of struggling with Post Traumatic Stress, Nicola Peffers was diagnosed with bipolar disorder and put in a permanent medical category by the Navy. The categorization meant that she could not be promoted or receive any more training, resulting in the end of her naval career. She was honourably discharged in 2012.