Seth Rogan as a geezer 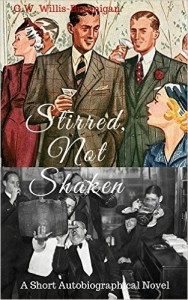 G.W. Willis-Brannigan is the pen name for Glenn W. Pearson who was born and raised in Vancouver as the son of Anglo-Irish ex-pat parents. He attended a private Catholic all-boys prep school, studied design and painting at art college, majored in theatre and art history at university, and he worked as a set designer, an interior designer and as a production designer in the film industry. In 2016, he self-published a comic e-novel via Kindle called Stirred, Not Shaken: A Short Autobiographical Novel (Middle Age Crazy Book 1). His projected trilogy of light reads will take his protagonist Boone from “‘man-opause’ denial to geriatric anarchy and into old age enlightenment.” Promising out-of-control events worthy of a Seth Rogan movie, the first installment features Boone is an upper-middle-class, sixty-year-old spoiled adolescent who has avoided maturity and responsibility, relationships and commitments for most of his reckless life. This story takes place over a typical weekend, starting after work on a warm summer Friday afternoon and ends quietly Sunday evening. All hell breaks loose in between. $2.99