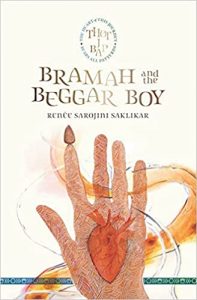 Poet and lawyer, Renée Sarojini Saklikar has won the gold medal in the Poetry-Speciality category of the 2022 Independent Publisher Awards for her book-length poem, Bramah and the Beggar Boy (Nightwood, 2021), which is the first title in an epic fantasy series in verse about a female locksmith and an orphan beggar boy. The two main time travel to help survivors of a world ravaged by climate change. Along the way they use cunning and magic to outwit the evil Consortium and join seed savers and outcasts to confront global disorder.

The Independent Publisher Awards, conducted annually, honors the year’s best independently published titles from around the world. The awards are intended to bring increased recognition to the thousands of exemplary independent, university, and self-published books released each year. Nicknamed the “IPPY” Awards, they were conceived as a broad-based, unaffiliated awards program open to all members of the independent publishing industry, and are open to authors and publishers worldwide who produce books written in English and appropriate for the North American market.