According to Wikipedia, the writer/illustrator Antoine de Saint-Exupéry was inspired to create the look of his character The Little Prince by one of five possibilities. 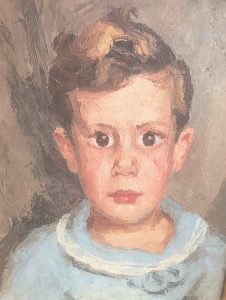 Now there is a sixth. The only little boy with blond hair that Saint-Exupéry knew at all well during the summer and fall of 1942, when he wrote his classic fable was Phil Boname—who is a long-time Vancouverite.

Boname’s father was Saint-Exupery’s closest friend when the book was being written in New York City and at Bevin House on Long Island. The two had spent countless hours together in both France and the U.S. trying to design top-secret aircraft to decimate the Nazis.

Boname’s father sometimes took his little son with him for his talks with the aviator/writer who Phil Boname often refers to as “Saint X.” Antoine de Saint-Exupéry knew Phil Boname better than any other child. And Bonhome, as a child, had blond hair.

Boname recalls in a December interview recorded with Yosef Wosk and Alan Twigg that Saint-Exupéry—who was very tall—struck him as an intimidating figure.

It has also been recorded that Saint-Exupéry met a precocious eight-year-old boy during a visit he made to Quebec City in 1942. This was the son of philosopher Charles De Koninck).