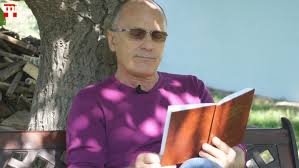 One of the signs of maturation for the B C. publishing industry is its ability or inclination to accept foreign voices, to look beyond the conventional English pathways. The industry has proved itself worthy in this respect by incorporating First Nations’ cultures and writers; now there are growing signs of internationalism. Hungarian-born poet, novelist and publisher Attila F. Balázs now has two books in English translation from B.C. publishers. First came his novel, written in Romanian,  Casanova’s Metamorphosis (Ekstasis $22.95), translated by Adrian George Sahlean ; now there’s a poetry collection, Blue (Libros Libertad 2014), translated byElizabeth Csicsery-Rónay. The novel reinvents Casanova’s transformation from man into myth, the story of how the world’s most notorious lover of women became a iconic seducer. Casanova’s Metamorphosis presents a complex peronality who was both a Venetian librarian, who penned Histoire de la vie,  and a charming seducer. According to publicity materials, “Casanova seeks liberation through sublime existence, sometimes sinner, sometimes saint, capricious and shifting like the self reflected in a room full of mirrors. Translated from the Romanian, Casanova’s Metamorphosis is a lyric masterwork, and the transformation, as in Ovid, is alchemical. It is rooted in the instinct towards love to which we all owe our being.” Attila F. Balázs, Hungarian writer, poet, literary translator and publisher, was born in Transylvania in 1954. In 1994 he established the publishing house AB-ART, where he is the company director. He is the editor of the literary magazine Poesis International and the general editor of the literary journal Szőrös Kő. He has received several literary awards, including the literary translator award of the Romanian Writers’ Association, and Lucian Blaga award in 2011. He is a member of Slovakian, Hungarian and Romanian writers’ organisations.

Is blue the colour of patience?
Is this why the sea and the sky
turn grey
when harmony
and patience
and the sensuality of emotions
are spent?

Isn’t the sea, ever angry,
that moved into your eyes?

Can you only swing on its waves?

Sweep my fear
far away
like the carcass of an octopus