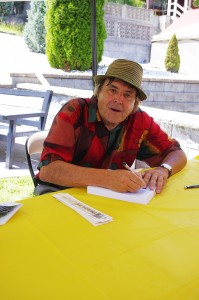 Due to his passion for ball hockey or “shinny,”, D’Arcangelo was honoured with the 2013 B.C. Sports Hero Award for floor-hockey. The East Trail native has organized ball hockey games for most of his life starting from his youth, every week in the winter months, then more formally from a neighborhood parking to the Cominco Gym, the MacLean School in Rossland, Central School, the Armouries, Field House, and eventually Trail Middle School gym. As of 2015 when the book was publised, the ‘Sultan of Shinny’ was still organizing a weekly contest at the Kootenay-Columbia Learning Centre. [Liz Bevan photo]