How Léon Theremin gave the world the theremin 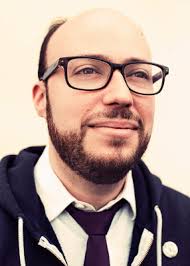 One of the big names at the the Cherie Smith JCC Jewish Book Festival in Vancouver, Nov. 21-26, will be Sean Michaels, winner of the 2014 Giller Prize for Us Conductors, a debut novel inspired by the life of Léon Theremin, inventor of the new musical instrument called the theremin. Articulate and personable, Sean Michaels  first gained prominence as a Montreal-based music critic and blogger. He also performs as an improv artist. His breakthrough novel explores the relationship between Léon Theremin and fellow Russian émigré Clara Rockmore, the artist who is generally acclaimed as the greatest practioner of the remarkable ‘hands off’ instrument that he evolved from Soviet government-sponsored research into proximity sensors.

Léon Theremin is the westernized name of Lev Sergeevich Termen, a Russian physicist who is credited with understanding the musical capabilities of the Russian research in 1920. After touring Europe giving exhibitions to full houses, he patented the instrument in the U.S. Unfortunately the stock marker crash of 1929 was a factor in limiting the success of the RCA Thereminvox. Rockmore, as the leading thereminist of her era, toured the U.S. with a mostly classical repertoire, often appearing with Paul Robeson. During this era, the Soviet consulate apparently demanded Léon Theremin divorce his wife, Katia. This enabled the inventor to shock many people with his marriage to the prima ballerina of the American Negro Ballet Company, Lavinia Williams. The ostracized couple remained together until he fled the U.S. in 1938, allegedly kidnapped by Soviets, but more likely due to debts. In the Soviet Union he was forced to work in a gold mine before being transferred to a laboratory prison camp at Magadan, Siberia.

Released in 1947, he was pronounced rehabilitated in 1956 and he supposedly worked voluntarily with the KGB until 1966. Having successfully developed eavesdropping technology, Léon Theremin became a Professor of Physics at Moscow State University in the 1970s. Eventually he was allowed to travel abroad, usually accompanied by his daughter. Before he died in Moscow at age 97 in 1993, he was reunited with Clara Rockmore in the early 1990s during a visit to the U.S.

Sean Michaels’ Us Conductors suggests and imagines a possible intimate relationship between Rockmore and Léon Theremin.

Once again the JCC Jewish Book Festival has a roster of writers from Canada, the U.S. and Israel.  Literary events include meet-the-author opportunities, readings and panel discussions, the annual book club event, writing workshops, children’s and youth authors, wellness and food subjects, interdisciplinary and multi-media events and two onsite bookstores – new and used, open throughout the week.

SEAN MICHAELS opens the festival this year with a talk about Us Conductors.

As well, AYELET TSABARI, winner of the 2015 Sami Rohr Prize for Jewish Literature, will be presenting the cinematic short stories from her collection The Best Place on Earth. DAN EPHRON, former Jerusalem bureau chief for Newsweek, will be analyzing the tectonic changes brought forth in Israel by Rabin’s assassination in Killing a King.

Novelists also include STUART ROJSTACZER , winner of the Outstanding Fiction Debut prize for The Mathematician’s Shiva, and SIGAL SAMUEL with her own debut Mystics of Mile End.

“The Jewish Book Festival embraces everyone who loves the written word” says newly appointed Festival director, Dana Camil Hewitt. “Jewish writers are part of the diverse fabric surrounding us: their themes are universal, but their approaches as varied as the world we live in. We will be exploring connections of literature with music and the visual arts, discovering exotic and colourful Jewish communities, debating politics and the environment: there will be something for everyone with our diverse and entertaining selection of celebrated authors and panelists.”

The Jewish Book Festival program guide is available at select locations throughout the Lower Mainland after October 15, 2015. All events take place at the Jewish Community Centre of Greater Vancouver (950 West 41st Ave @ Cambie).