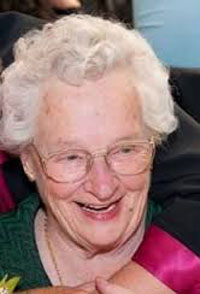 The founder of Mosaic Books in Kelowna, the Okanagan’s largest independent bookstore for almost 50 years, has died.

Rhoda B. Moss passed away peacefully in Victoria on February 5, 2017. Prior to her moving there in 2002, Moss was well-known in the Kelowna community. In 1968, responding to the need for a bookstore and her passion for books, she founded Mosaic Books just steps away from Okanagan Lake. Along with her long-time friend, Wilma Dohler, Moss ran Mosaic Books until she retired in 1991. Mosaic Books continued and the current owners, the Neill family purchased it in 1995. They are second and third generation booksellers from Metro Vancouver but fell in love with the Okanagan valley. Michael and Michele Neill and their two adult children, Trevor and Alicia have grown Mosaic into the large 8,000 square foot store it occupies now.

A reception for Moss’s family, friends and colleagues will be held at Mosaic Books on Sunday, April 2 from 2:00 to 4:00 p.m.