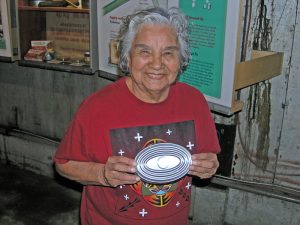 Firebrand Mazie Baker accused the Council of the Squamish Nation of fraud and corruption.

Although she was illiterate, her activism and distrust of the male hierarchy resulted in her Squamish people rejecting self-government to instead trust Indian Affairs.

In The Amazing Mazie Baker, Kay Johnston recalls the life and work of Mazie Baker, born in 1931, who exposed irregularities in housing policies and accused the Council of the Squamish Nation of fraud, corruption, and financial mismanagement. Known to her family as ch’esken (Golden Eagle), Mazie made great bannock and died in 2011. The Amazing Mazie Baker: the Squamish Nation’s Warrior Elder is a hard book to read, despite Kay Johnston’s lively and competent style and her ability to let the “unflinching, irreverent and uncompromising” Mazie Baker tell her own story.

Johnston took on this book project out of respect for what Mazie Baker had achieved. But the book is not without flaws. I cringed, but persevered, after Johnston asserted that the Squamish Nation is a matriarchial society (p. 11). Traditionally it was not governed by women and descent was not reckoned solely in the female line.

Johnston warns that the reader may not agree with everything Mazie Baker says or believes (p. 10) and this is certainly my experience. I did my best to ignore Mazie’s uninformed views on the linguistically accurate and well-accepted Squamish orthography (spelling system) (p. 75). I kept waiting for the promised hard-hitting expose of malfeasance in the administration of Squamish affairs by the Department of Indian Affairs and, as I had been led to believe, by the Squamish Nation itself. Mazie Baker’s parents and father-in-law had encouraged her, as a feisty and outspoken individual, to always stand up for herself. Though illiterate, she relied upon her memory and personal contact with others in the community to form her opinions and rally support.

It also required a court appearance to have dismissed the City of North Vancouver’s ill-considered injunction to stop the protest and a sensible judge to send the parties off to resolve the “ridiculous” debacle in favour of the demonstrators. Mazie also fought for a school bus and road bumps, issues that became, according to Johnston, training for her battles with the Squamish Council that lay ahead.

The Squamish administration felt the full force of her convictions when Mazie found that Council had authorized building upon a lot for which her adopted brother, then in jail, held a certificate of possession, giving him lawful tenure. The incident became a raucous affair ending with an angry membership, several firings of Band personnel, and a couple of wrongful-dismissal suits, along with a new house for her brother.

On Indian Reserves across Canada certificates of possession were, and remain, a contentious issue and Mazie Baker found herself embroiled in several disputes regarding her own land ownership on the Squamish Reserves. “I am a land baroness,” she proudly told Johnston (103). Sufficient housing is a perennial problem on Indian Reserves. This issue was exacerbated by the addition of people to the membership rolls brought about in 1985 by Bill C-31, well-intentioned legislation that returned Indian status to many Indigenous women who had lost it though marriage to non-Indigenous men.

One of Mazie’s relatives suffered greatly from this earlier practise of delineating membership. Coupled with the length of the Squamish Nation’s waiting list for housing and the seemingly biased nature of decisions about who received houses, revision of the Nation’s housing policy became a focus for Mazie Baker’s formidable energy.

In the late 1990s, Vancouver newspapers began to take an interest in Squamish affairs and Mazie found herself the spokesperson for good headlines and explanations of why such disparity in wealth was evident on Squamish Reserves.

The explosive atmosphere being fuelled by such press provoked the Squamish Council to circulate a newsletter advising that “claims of fraud, corruption and financial mismanagement on the part of your Council and Administration … are based on unproved allegations by several members of the Squamish Nation” (p. 130). Yet Mazie Baker was relentless. When she caught wind that the Nation was discussing the First Nations Land Management Act, a significant piece of legislation that would forever affect the governance of the Squamish people and allow them to take over from the federal Department of Indian Affairs the management and control of their own land and resources, Mazie perceived it as further evidence that the Council could not be trusted to work in the best interests of her people.

She and her friends then mounted an attack against the Squamish Council, demanding full consultation and transparency. Her campaign resulted in the membership’s overwhelming rejection of self-government and her people’s choice to trust Indian Affairs over their own kin (p. 175).

Gibby Jacob, the economically savvy Squamish Nation chief, had once stated that in ten years’ time the Squamish would be B.C.’s largest developer, but now the Nation’s pursuit of self-government had been thwarted by a woman with incredible chutzpah who, though she couldn’t read the documents being discussed, took it upon herself to understand the issues. May this be a lesson to all. Dorothy Kennedy is a consulting anthropologist, occasional university lecturer and expert witness specializing in the Indigenous cultures of British Columbia, Washington State and, most recently, Alberta and the Yukon. She completed a Doctorate degree in Anthropology from the University of Oxford, England in 2000, and an award-winning Master’s degree in Anthropology from the University of Victoria where she has taught in the Anthropology Department and the Indigenous Education Program. For the past four decades, including two decades devoted intensively to ethnographic and linguistic fieldwork in First Nations’ communities, she has been engaged full-time in the research process, from conceptual planning and document review to issue-focused research, analysis, and reporting. She is the author or co-author (primarily with her colleague and husband, Randy Bouchard), of hundreds of reports, as well as numerous published articles and books, both scientific and popular, including four articles in the Plateau and Northwest Coast volumes of the Smithsonian Institution’s Handbook of North American Indians and, most-recently, Talonbooks’ The Lil’wat World of Charlie Mack (2010). Kennedy and Bouchard are also editors of the well-acclaimed Indian Myths and Legends from the North-Pacific Coast of America, a translation of Franz Boas’ first and significant collection of BC First Nations’ mythology published by Talonbooks in 2002, and originally published in German in 1895. As of 2017, she was with Bouchard & Kennedy Research Consultants at Mill Bay, B.C.

One Response to “Ormsby #72: Reservations on reserves”