“BC Hydro, the city government, police, RCMP, firefighters and electrical inspectors all work to identify high electrical usage, and then enter homes without a warrant, and there is an assumption of guilt rather than innocence." — Susan Boyd 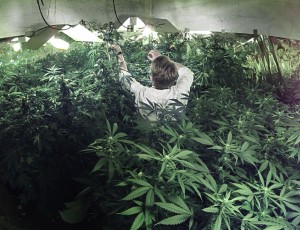 Killer Weed is a new study of marijuana that reveals anti-pot rhetoric in Canada is over-wrought.

Two researchers have collected and analysed more than 2500 newspaper articles related to marijuana published in national, provincial and local newspapers in British Columbia from 1995 to 2009 and concluded widespread scare tactics are a government smokescreen for unwarranted invasions of civil liberties.

Canada’s Public Safety Minister Anne McLellan announced back in 2004 that the federal government was committed to eradicating marijuana growing operations and that people who smoke marijuana are stupid. “I see grow-ops as one of the single biggest problems we face in our communities,” Anne McLellan declared.

Co-written with Connie Carter, a senior policy analyst for the Canadian Drug Policy Coalition, and Susan Boyd, a UVic academic, Killer Weed: Marijuana Grow Ops, Media, and Justice (University of Toronto Press $28.95) documents fifteen years of exaggeration and scare tactics about marijuana growing fueled by a few vocal spokespeople, the RCMP and media.   Boyd and Carter conclude in their final chapter that the public is being duped into compliance with draconian, anti-marijuana policies. UVic academic Susan Boyd has written five previous books about drug use and attitudes towards drugs.

They cite the findings of the federal government’s justice department’s own study on marijuana grow ops that challenges claims made by the RCMP and media regarding organized crime, violence and public safety. That justice department report is corroborated by scholarly research–but the justice department study was never released. Boyd and Carter obtained a copy of the unreleased study from a reporter who received it following a Freedom of Information request.  ”The second important finding,” says Boyd, “concerns civil initiatives and by-laws, municipal multi-partner initiatives that have sprung up all over B.C. and elsewhere since 2004. There is little oversight of these initiatives as they are outside criminal justice.

“BC Hydro, the city government, police, RCMP, firefighters and electrical inspectors all workto identify high electrical usage, and then enter homes without a warrant, and there is an assumption of guilt rather than innocence. These homeowners are fined regardless of whether or not evidence of marijuana growing is found.”  Specifically, on page 146, Killer Weed discusses the so-called “smart meters” that have been forced upon BC Hydro customers.  According to the authors of Killer Weed, a fifteen-year drug scare about marijuana grow ops has helped to facilitate changes in federal law (mandatory minimum sentencing for some drug offences, including growing more than five plants (resulting in six-month jail sentences), as well as changes in the medical marijuana program (eliminating personal growing and designated growers), provincial legislation, and civil by-laws and multi-partner initiatives.   ”We question these changes,” says Boyd, “and the turn to law and order responses, many that contravene charter rights, and the impact on vulnerable populations such as youth, aboriginal people and the poor.”

There are only three other books on drugs and cinema published prior to Susan Boyd’s Hooked: Drug War Films in Britain, Canada, and the United States (2008). Most significantly, Michael Starks’ illustrated history Cocaine Fiends and Reefer Madness (1982) looks at films from around the world. Boyd examines Canadian “drug” films, as well as British and U.S. productions, from 1912 to the present. Declaring a war on any drug except alcohol is usually popular with voters.

Chinese Opium Den, produced in 1894, is considered to be the first drug film. It was a half-minute long silent film (Kinetograph) featured at penny arcades. The film was made for Thomas Edison’s film studio Black Maria. Its popularity sparked a host of other “opium” films but unfortunately only stills of Chinese Opium Den now exist. “Getting permission to include film stills was an education and it took months to figure out the copyright issue,” she says. “I was able to include films stills from the joint Canadian film, Harold and Kumar Go to White Castle.”

With Child. Substance Use During Pregnancy: A Woman-Centred Approach (Fernwood, 2007). Edited by Susan C. Boyd and Lenora Marcellus.