Ralph Maud, one of the founding English professors at Simon Fraser University in 1965, became an authority on the work of Dylan Thomas, Charles Olson and the ethnographers of the Pacific Northwest. 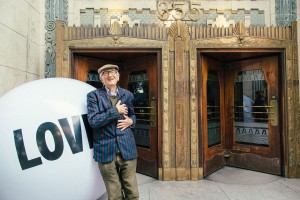 Born on December 24, 1928, Ralph Maud was an iconoclastic professor and eccentric pamphleteer who died on December 8, 2014.

As one of the founding English professors at Simon Fraser University in 1965, Ralph Maud became an authority on the work of Dylan Thomas, Charles Olson and the ethnographers of the Pacific Northwest. He was born on December 24, 1928. He died on December 8, 2014.

Born on December 24, 1928, Ralph Maud was an iconoclastic professor and eccentric pamphleteer who died on December 8, 2014.

“Ralph Maud could write, because he knew that all writing constituted a translation of (a) story,” says his friend and main B.C. publisher Karl Siegler. “He thought of writing as a kind of verbal notation–like a score is both a guide to and a record (pun intended) of a musical performance. That’s why he was so interested in acts and circumstances of the first written versions of oral histories, and why he loved Charles Olson so much: from the heart to the breath to the line… He will be missed.”

As one of the founding English professors at Simon Fraser University in 1965, Ralph Maud became increasingly interested in Pacific Northwest Aboriginal culture and taught Indian Oral Tradition. His books on ethnography were published by Talonbooks. “Ralph supported our publishing endeavours and authors’ efforts in many ways besides the books he wrote and edited for us,” recalls current Talonbooks publisher Kevin Williams. “He worked behind the scenes to help people their career and with their projects.

“He was a demanding taskmaster though: as Geoff Hargreaves commented, ‘He was a scholar of uncompromising rectitude.’ He had legendary energy and fought the good fight, political and literary, to his last day. His classes were legendary as was his desire to be a bookseller.”

Ralph Maud’s research into original source material led him to edit and revive the work of pioneer ethnographer Charles Hill-Tout for a four-volume collection, The Salish People (Talonbooks, 1978), representing Hill-Tout’s fieldwork from 1895 to 1911. It is divided by geographical and cultural areas: Volume I: The Thompson and the Okanagan; Volume II: The Squamish and the Lillooet; Volume III: The Mainland Halkomelem; Volume IV: The Sechelt and the South-Eastern Tribes of Vancouver Island.

This research let Maud to produce A Guide to B.C. Indian Myth and Legend (Talonbooks, 1982). Twice reprinted, this highly opinionated panorama of what Maud terms “mythography, the study of how a people’s oral traditional literature becomes available to us in published form,” amounts to a third- or fourth-year university survey course in which he grades the various sources of Aboriginal literature prior to the 1980s, usually in accordance with his own perception of their degree of sophistication. “I will not be telling the history of myth-collecting in British Columbia without bias,” Maud admits.

Whereas Maud praised the elements of Victorian melodrama in a translation by Charles Hill-Tout “because Hill-Tout is trying to meet fully the melodrama of the original,” Maud denigrates the Victorian English translations of the Sepass Tales as “hardly satisfying to the modern reader as verse.” Maud suggests Hill-Tout’s naïveté was a virtue when he began his work, witnessing the performance of the blind historian Mulks in North Vancouver, and he states “the most readable body of Native literature in the canon” was gathered in 1896 by Hill-Tout from the “brilliant” Chief Mischelle of Lytton. Mischelle’s version of the Transformer Story appears in Volume I of The Salish People.

“Maud has approached aspects of his topic with a certain insouciant bias,” observed reviewer Andrea Laforet of the National Museum of Man, “which can make what he has written not only superficial but also unjust. This is particularly true in the case of Franz Boas.” A Guide to B.C. Indian Myth and Legend is nonetheless a groundbreaking and engaging work, inviting the lay reader into the highly specialized and mostly academic-dominated field of myth collection.

Edited by Ralph Maud, The Porcupine Hunter and Other Stories (Talonbooks, 1993) is a collection of Henry W. Tate’s stories in Tate’s original English, which grew out of Maud’s survey of Franz Boas’ Tsimshian work published as an article, “The Henry Tate-Franz Boas Collaboration on Tsimshian Mythology” in American Ethnologist.

Ralph Maud’s Transmission Difficulties: Franz Boas and Tsimshian Mythology (Talonbooks, 2000) expands on the relationship between Henry Tate and Franz Boas and the problematic methodologies of their transcriptions. Between 1903 and 1913, Tate acted as an informant, recounting stories of Tsimshian mythology in letters to Boas that amounted to two thousand pages of text. “Tate, on his part, was a 20-cent-a-page man, a piece-worker,” Maud writes. Instead of faithfully transcribing stories told by elders, Tate wrote the stories in English first before translating them into Tsimshian. In the process he minimized sexual elements in deference to his Christianity and sometimes mixed his sources.

Boas, for his part, did not properly identify his source—his co-author—referring to Tate only as a “full-blood Indian of Port Simpson, British Columbia.” According to Maud, both men severely compromised the integrity of Tsimshian culture. “If only Boas had not been so uptight. If only he had been more forthright from the start and stated emphatically, ‘Listen Mr. Tate. You don’t get another red cent from me until I know exactly what you are doing, what you are filching from the texts I sent you, what you are writing off the top of your head and what are the real goods, the exact words of the old storytellers you know. And stop writing these pieces in English first, or no more money orders.’”

Ralph Maud also edited The Chilliwacks and Their Neighbors (Talonbooks, 1987) by Oliver Wells and he was a contributing editor to Coast Salish Essays by Wayne Suttles.

Ralph Maud grew up in Yorkshire, England, and obtained his B.A. and Ph.D degrees from Harvard. While teaching in Buffalo, he published an edition of The Notebooks of Dylan Thomas from manuscripts in the university library. His books pertaining to Dylan Thomas are Entrances to Dylan Thomas’ Poetry (University of Pittsburgh Press, 1963), Dylan Thomas in Print (University of Pittsburgh Press, 1970), and new editions of Collected Poems (Dent, 1995) and Under Milkwood (Dent, 1988), both co-edited with Walford Davies. He taught at the Dylan Thomas School in Wales and he got to know poet Charles Olson during a two-year stint at the State University of New York at Buffalo, where Olson was also a staff member.

Maud became involved in efforts to restore Charles Olson’s house at 28 Fort Square, Gloucester, Massachusetts, as a research centre for Olson studies. As an Professor Emeritus of English, he engaged in editing a collection of Charles Olson’s letters. Also edited by Ralph Maud, Poet to Publisher: Charles Olson’s Correspondence with Donald Allen (Talonbooks, 2004) recalls the story behind The New American Poetry (Grove, 1960), an influential anthology edited by Allen.

In 2008, Talonbooks released Maud’s “reactive” biography of Charles Olson in part as an attempt to remove the harm Maud believes was done to Olson’s image by Tom Clark’s Charles Olson: The Allegory of a Poet’s Life (Norton, 1991). Having taught the poetry of Charles Olson at least one semester every year from 1965 to 1994, Maud depicted Olson in Charles Olson at the Harbor (Talonbooks, 2008) as a man possessing great genius, a successful Melville scholar, and a lasting influence on the world of poetry. “The situation I find myself in is somewhat akin to James Boswell’s,” Maud wrote, because Boswell undertook his famous biography of Samuel Johnson to repudiate a preceding biographer.

In 2010, Maud marked the centenary of Charles Olson’s birth with a revised, second edition of Muthologos, the poet’s collected lectures and interviews. The new compilation included five pieces not part of the 1978 edition.

Co-edited by Sharon Thesen and Ralph Maud, After Completion: The Later Letters of Charles Olson and Frances Boldereff (Talonbooks, 2014) follows from an earlier edition of their letters, A Modern Correspondence (Wesleyan University Press 1999), that spanned three years and more than three hundred letters. Charles Olson had many correspondents, but Frances Boldereff, a book designer and typographer, Joyce scholar, and single working mother, was muse, lover, and critic to Olson. A Modern Correspondence concludes with a crisis at the end of their physical relationship. After 1950, Boldereff would no longer believe so whole-heartedly in Olson’s work—or his promises to spend time with her. After Completion picks up the correspondence post-crisis and covers approximately 140 letters written between 1950 and 1969.

After Completion: The Later Letters of Charles Olson and Frances Boldereff (Talonbooks, 2014) — co-edited with Sharon Thesen

Charles Olson at the Harbor (Talonbooks, 2008)

Where Have the Old Words Got Me? Explications of Dylan Thomas’s Collected Poems (McGill-Queen’s University Press, 2003)

What Does Not Change: The Significance of Charles Olson’s “The Kingfishers” (Farleigh Dickinson University Press, 2003)

The Porcupine Hunter and Other Stories (Talonbooks, 1993) — editor

The Chilliwacks and Their Neighbors (Talonbooks, 1987) — editor