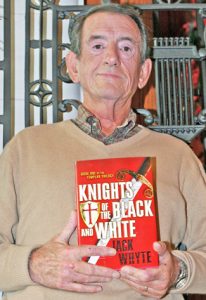 One of B.C.’s most successful historical novelists, Jack Whyte has died.

At the age of 52, Whyte burst onto the writing stage with the Penguin Canada release of The Skystone in 1992, the first of his quartet of Arthurian novels called A Dream of Eagles. His work was subsequently published in more than a dozen countries with far-flung commercial success.

Entering the fictional field of Thomas Mallory and T.H. White, Jack Whyte was determined to trace, in his own way, the origins of the sword Excalibur and the formative years of King Arthur.

“Arthur is the quintessential hero who surrounds himself with other heroes of equal stature–Lancelot, Merlin, Percival,” he said. “The story of the Holy Grail contains in and of itself the nucleus of man’s search for the unachievable.”

Whyte’s tales of violence, romance and heroism led to a twin-volume novel, The Sorceror, in which Arthur, at 16, makes his first journey to Gaul and meets Lancelot. Returning to England with his mentor Merlyn, Arthur must prove himself on the battlefield while Merlyn transforms himself from soldier to powerful mystic. Ultimately Arthur must gain the unified support of his people by declaring himself Champion of the Christians and famously pulling the sword from the stone.

With this event, the dream of the original ‘Eagles’ (Caius Britannicus and Publius Varrus) had come to fruition. Whyte’s published-in-Canada series was repackaged for the United States, with new artwork and a different overall title — The Camulod Chronicles instead of A Dream of Eagles — after U.S. rights were sold to St. Martin’s Press of New York and his novels came under the control of the marketing division of Forge/Tor, a subsidiary of St. Martin’s.

Jack Whyte published several more Arthurian novels including Uther, a saga about Arthur’s father, Uther Pendragon, cousin of Merlyn. This was followed by Clothar the Frank, the story of King Arthur’s friend and betrayer Lancelot during the reign and downfall of Riothamus. Clothar (Lancelot) dedicates himself to reclaiming his birthright and avenging his parents’ deaths. The series of nine novels and eight books [see list below] concludes with The Eagle.

In 2006, Jack Whyte launched a new trilogy about the original nine Templar Knights, commencing with the madness and cruelty of the First Crusade in 1088. His opening novel Knights of the Black and White follows the fortunes and misfortunes of Hugh de Payens, who, as a disenchanted member of a powerful, secret allegiance of French knights, decides to dedicate his military skills to protecting pilgrims on the road to Jerusalem, so he founds The Poor Fellow Soldiers of Christ. The final volume Order in Chaos follows the plight of Templar Knight William St. Clair after Philip IV arrests every Templar in France, seizes the Order’s assets and launches the Inquisition. St. Clair escapes to the island of Arran in Scotland where he trains his comrades for a return to France. After a final battle with his Templar Knights, he becomes disillusioned and leads survivors to consider a search for a fabled land that lies beyond the Western Ocean.

A follow-up trilogy, The Guardians of Scotland, recalled the Scottish Wars of Independence in the 14th century. The first novel, The Forest Laird: A Tale of William Bruce (2010), opens in the pre-dawn hours of August 24, 1305 A.D., in London’s Smithfield Prison, where the outlaw William Wallace, who is to be executed at dawn, is visited by a Scottish priest who has come to hear his last Confession. Subsequent volumes outlined the lives of Robert the Bruce, King of Scots; and Sir James Douglas, known as The Black Douglas.

Born in Scotland, Jack Whyte was educated in England and France. He taught Speech and Drama in England for five years prior to immigrating to Canada in 1967 to work as a high school teacher in Athabasca, Alberta, later moving to Calgary.

Prior to writing, Whyte had a variety of jobs in business, advertising, public relations and the arts. In the early 1970s, he wrote, performed and toured a one-man show entitled Rantin’, Rovin’, Robin — A Night With Robert Burns. In 1974 he composed a patriotic ode, A Toast to Canada, Our Adopted Land, which he performed at various exhibitions and sold on parchment scrolls. He wrote several television specials for CBC, including a Remembrance Day program with the Irish Rovers.

In 1978, he began to write fiction and came to Vancouver in 1986 to work as Director of Corporate Communications for Johnston Terminals Limited, a cartage company. In 1991, he collaborated with singer/producer Terry Jacks to narrate an award-winning documentary for Jacks’ Environmental Watch organization. A Bard for the Calgary Highlanders, a founder of the Burns Club of Calgary, a founder of the Burns Club of Vancouver and a former corporate communications consultant, Whyte was also an avid golfer who sang in eight languages.

In 1996, Jack Whyte moved to Kelowna where he bought a house on a golf course. There, he wrote his poetry-laden memoir Jack Whyte: Forty Years in Canada (Heritage, 2007) that includes ruminations about Canada’s “two solitudes”; Pierre Trudeau; heroes and feet of clay; Alberta oil; multiculturalism; fast food; Canada’s military; health care; and a broken education system, while steering clear of intimate information.

After a long battle with liver cancer, Jack Whyte died in Kelowna on February 22, at the age of 80.