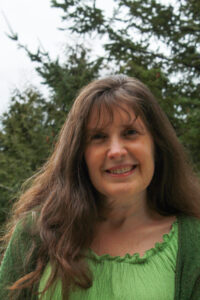 In 1970, Phyllis Dyson was an infant when she moved from Ottawa to Burnaby with her brother and single parent mother. Twenty years later, her family made headlines when her mother was shot and killed by a police officer at a lower mainland sky train station. Although Dyson knew her mother had paranoid schizophrenia it wasn’t until twenty-five years later, compelled by her young daughter’s questions, that she researched the tragedy. It compelled Dyson to write a book about her family history, Among Silent Echoes: A Memoir of Trauma and Resilience (Caitlin Press, October $24.95). Through anecdotes of family life, Dyson recalls many happy memories as well as devastating experiences both while living with her mother and within the BC foster care system. Her heartbreaking yet joyful social justice story offers a unique perspective as the child of a parent struggling to cope with a psychotic disorder. Now an elementary school teacher, Dyson holds a bachelor of arts in music and a graduate diploma in special education. She is a member of the BC Schizophrenia Society and has promoted mental health awareness in her West Coast community through a program called Partnership. 978-1-77386-064-0