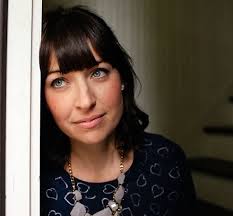 You don’t have to look very far to find ambitiously earnest parents who are eliminating play from the child’s agenda. Over-scheduled Andrew (Tundra $19.99) Ashley Spires is about a chickadee whose calendar is so full of classes and lessons and self-improvement activities that he has precious little time for fun. Sanity prevails. He eliminates most of his obligations and makes time for friendship and distractions.

Born in 1978 in Richmond, B.C., illustrator Ashley Spires studied photography and book making at Emily Carr College of Art and Design. Her hand-made books have appeared in exhibits and she makes finger puppets for sale. Her collage-style illustrations first appeared in Peter Kuitenbrouwer’s Our Song: The Story of “O Canada”, The Canadian National Anthem (Lobster Press, 2004, $19.95). Later she supplied illustrations for My Mom Loves Me More Than Sushi (Second Story Press, 2006) by Filomena Gomes.

In Binky: License to Scratch, the space team is alarmed when they discover their humans are going away without them! In a constantly worsening situation, the “pet hotel” turns out to be the vet, and the evil Professor Tuffy, an ex-space pet, is on-site. With no one else up to the task, it’s up to Binky to stop Tuffy and her terrifying experiments.

Having lived in Toronto and Saskatoon, Spires now resides in Ladner.