Dreams of glory, lives of hardship

Newly discovered diaries reveal the brutal lives of miners during the 1858 Fraser River gold rush in BC. 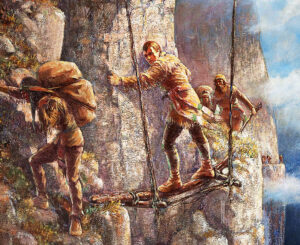 Miners depicted on the dangerous crossing of the Fraser River in 1858.

If the miners were lucky, they could find enough gold to buy a home or build a business. But gold is rare even in good locations and, in the end, many miners did not even cover their expenses.

After much diligent sleuthing, UBC professor emeritus Alexander Globe found the only known diaries of some of the early gold miners who came to BC in the mid-19th century to seek their fortunes along the Fraser River.

Through the words of these entrepreneurial miners, Globe becomes a witness to their hardships and dreams of glory, as he details in Gold, Grit, Guns: Miners on BC’s Fraser River in 1858 (Ronsdale Press $26.95). Globe excels in describing the mechanics of the life of a miner, including the cost of food, travel, supplies and living quarters. The book also includes copious maps and rarely seen images of life on the Fraser during these times.

Mining culture in the 19th century was deleterious to the lives of Indigenous people, and Globe chronicles that grim reality too. He also tells of the devastating effects of the gold rush on the landscape and the salmon run. BC BookWorld caught up with Alexander Globe to talk about his research methods and the lives of these adventurers. 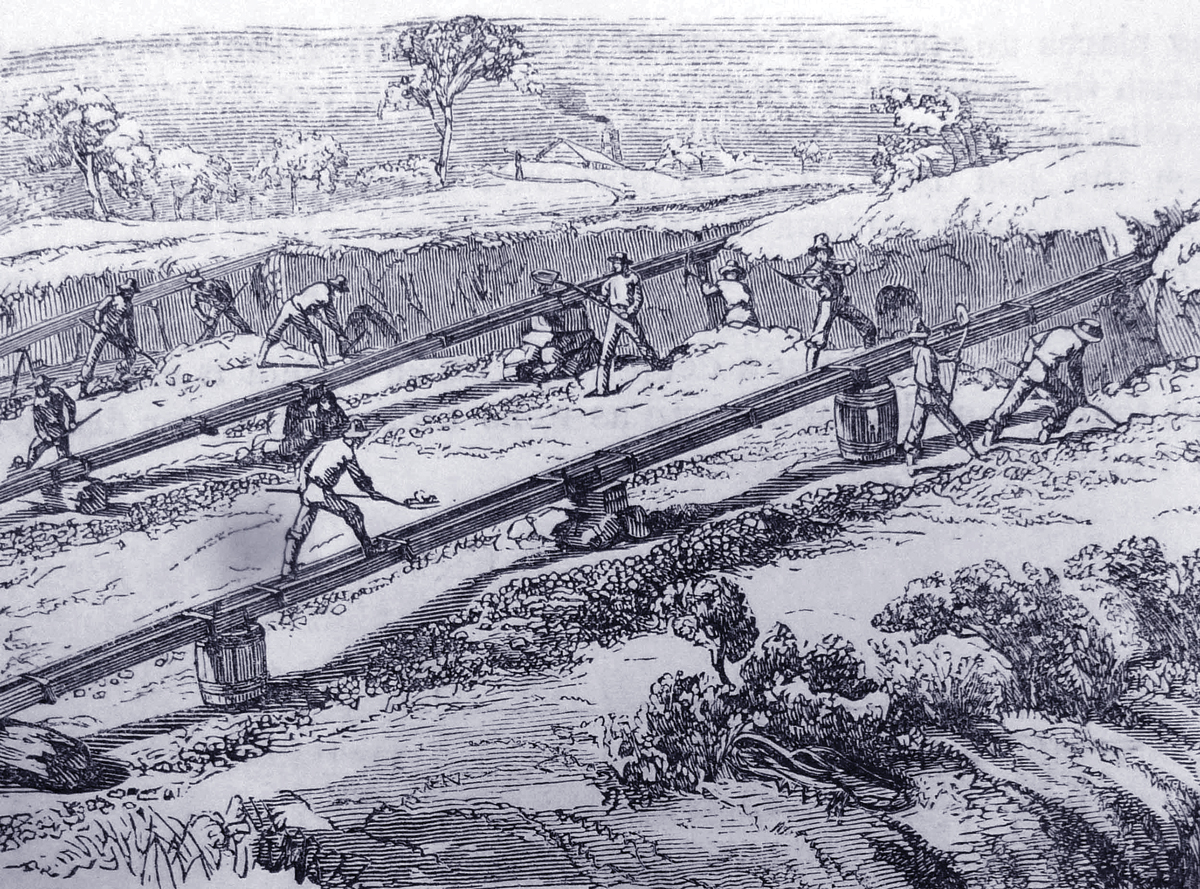 Sluices up to several hundred metres long featured complex sieves and
required a constant flow of water (ideally 8,000 litres per minute) from high elevations. The pressure created from the water flow separated gold from rocks and sediment, but the sluices damaged terrain. From The Miners’ Own Book, 1858.

BC BookWorld: How did you discover the diaries?
Alexander Globe: I’m a compulsive researcher. For two months, I searched the archives and libraries of many west coast institutions, plus important eastern repositories such as Library and Archives Canada, the US National Archives and Yale University. When I found a promising listing, I visited the institution personally. Dozens of times I discovered that the item was not a diary and not written in 1858. Only four diaries written on the Fraser River in 1858 were found.

BCBW: What drew people to the Fraser in 1858?
AG: At that time, the average North American worker earned a dollar a day with no hope of social or economic advancement. Lucky Fraser River miners reported daily finds of over $50 a day. Suddenly a house and family or business opportunities were within reach. Those dreams drew 33,000 people to the Fraser River in 1858. Most came from California, which was experiencing an economic slump. The problem is that gold is rare, even in good locations. To produce the gold for one ring, 2.8 tons of debris are typically discarded. Many miners did not even cover their expenses.

BCBW: Before a road was built, how did miners get up the Fraser to find gold?
AG: After June of 1858, there were regular steamers from Victoria up the Fraser River to Hope. They cost as much as a fare from San Francisco though. Many prospectors preferred to paddle up the Fraser in canoes. Between Hope and Yale, everybody took canoes they owned or which were paddled by Indigenous guides. The trails along the Fraser Canyon beyond Yale were so dangerous that only a few thousand of the 33,000 arrivals ventured there. 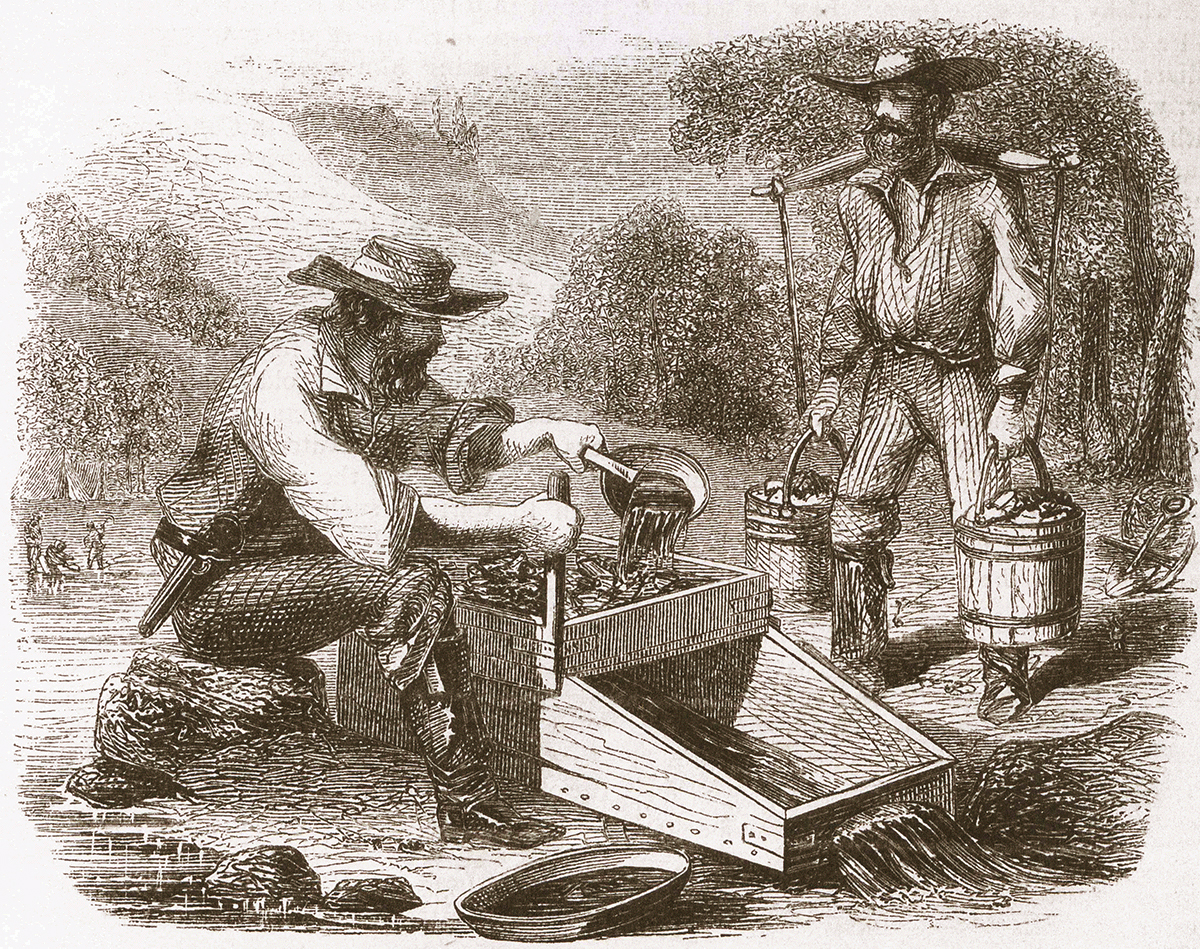 Miners rocking for gold: A technique capable of processing between two to six cubic metres of material per day as detailed in Alexander Globe’s new book.

BCBW: How difficult was it to build the Lillooet Harrison Trail?
AG: Governor James Douglas had a great deal of experience working in the wilderness, so he thought that 500 road cutters would be able to complete around 70 miles of roads reasonably quickly. However, the poor people skills of some supervisors led to contradictory orders and poor morale. There were supply chain issues feeding 500 people, particularly since gouging prices made it impossible to purchase the number of mules needed for transport. Many road grades were too steep and bridges were not built above normal spring water levels. The road from Harrison Lake started on August 8, 1858, and reached Anderson Lake at the start of October. Remedying the defects took years. But the lessons learned made the planning and building of the Cariboo Road much more successful. 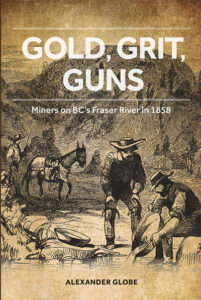 BCBW: The common view is that miners panned for gold in a river, but did they use other methods to find gold?
AG: In 1858, all the mines were surface affairs on the gravel bars along the Fraser River.  Pans were used to find promising locations. Then large rocks were thrown aside and digging began up to three metres deep. Smaller stones and clay were shaken away through sieves in what they called a “rocker.” The heavy gold washed into the bottom. Later, aggressive sluicing started. But underground mining of quartz veins took place later in the Cariboo.

BCBW: What was the fate of the four miners whose diaries you found?
AG: One, a California miner, spent all of his $200 savings getting to the Fraser and left destitute. He wound up as a mining broker in San Francisco and died in 1890, at the then advanced age of 59. Another, a resident of Whidbey Island, earned around $1,000 between August 11 and November 12, then built a house for his bride back in Washington. He succumbed to tuberculosis in 1866, aged only 34 years. A third, an Upper Canadian who succeeded in California, also earned around $1,000 between August 10 and October 12. He drowned later in the Cariboo, probably before his 30th year.  The fourth diarist became a successful merchant and riverboat operator after 1858. He drowned in a shipwreck during 1875, aged 44.