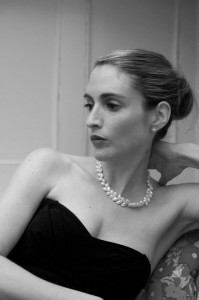 Alexandra Oliver is the winner of this year’s $1,000 Pat Lowther Memorial Award for the best book of poetry by a Canadian woman.

Since emerging onto the Vancouver poetry scene in 1992 and being named the following year as one of the Top Ten Young Artists of the year by The Vancouver Sun, Vancouver-born Alexandra Oliver has gained two Pushcart Prize nominations, as well as a CBC Literary Award nomination. Now she has won the League of Canadian Poets’ Lowther Award competition with Meeting the Tormentors in Safeway (Biblioasis $17.95).

Meeting the Tormentors in Safeway, Oliver’s second poetry collection, has been likened to text-based home movies about the comedies, cruelties, and epiphanies of domestic life. She previously published Where the English Housewife Shines (Tin Press London, UK 2007). In 2013, she was co-editing The Rotary Dial, a journal of formalist poetry based in Toronto, and teaching in the Stonecoast M.F.A. Program at the University of Southern Maine. She studied Italian film and theatre, only to graduate from university and declare, “Whoa! Where are all the film history jobs?”

Oliver has subsequently performed her work at places as diverse as Lollapalooza, The National Poetry Slam, the CBC Radio National Poetry Face-Off, the Bowery Poetry Club in New York, the Spectacular Obsessions Fellini Retrospective at the Bell TIFF Lightbox and the Italian Contemporary Film Festival in Toronto. Her work has appeared in numerous journals and publications worldwide, including Orbis Rhyme International, Nexus, The Atlanta Review, The New Guard, Light Quarterly, Future Cycle Poetry, The Raintown Review, and The Vancouver Sun, as well as About.Com’s Poems After The Attack anthology, a collection discussing and reflecting upon the aftermath of 9/11. She is also co-editing (with Annie Finch) an anthology of metrical poetry.

Oliver has taught poetry and led workshops in high schools, colleges, libraries, cultural organizations and prisons, and was one of the Directors of the Edgewise Electrolit Centre, an organization created to promote Canadian poetry and new poets through the use of new media. Her interests include form, ekphrasis, translation, performance, and creating poetry syllabi for ESL speakers, seniors, victims of violence, and at-risk youth. As of 2013, she divides her time between Toronto and Glasgow, Scotland, where she teaches poetry through the Govan and Craigton Integration Network and acts as a Staff Writer for the Glasgow Film Theatre. A film history job at last, sort of.