Ryga Award gets a boost

The George Ryga Award for Social Awareness will be presented at the Vancouver Public Library, on June 11, with a $2,000 prize and a civic declaration of Author Appreciation Day. The public is welcome. 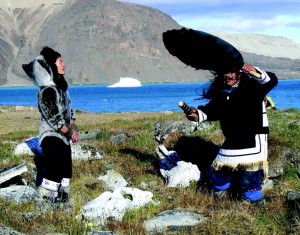 Shelley Wright’s Our Ice Is Vanishing / Sikuvut Nunguliqtuq: A History of Inuit, Newcomers, and Climate Change (McGill-Queens $39.95) has won for revealing how the Inuit have become the witnesses and messengers for climate change.

Formerly Okanagan-based and hosted by Okanagan College and George Ryga House in Summerland, one of the province’s foremost literary awards has been elevated to a larger stage this year. With the dissolution of the George Ryga Society, the Ryga Prize has been rescued and enhanced with a cash award for the winner. It will now be presented in tandem with the province’s most illustrious literary prize, the $5,000 George Woodcock Lifetime Achievement Award, on June 11, at 7 pm, at the main branch of the Vancouver Public Library.

The public is welcome.

Replete with Shelley Wright’s recollections and photos, this absorbing exposé of the legacies of exploration and intervention in Canada’s north has been selected as the first presented-in-Vancouver winner from more than forty entries [listed below].

Shelley Wright will receive the Ryga Award in the Alice MacKay Room at the Vancouver Public Library along with a presentation of the George Woodcock Lifetime Achievement Award to Wayson Choy, at 7 pm. Shelley Wright lived and travelled in the Arctic for more than ten years beginning with her experiences as the Northern Director of the Akitsiraq Law School based in Iqaluit. Now a professor of Aboriginal Studies at Langara College, she has combined scientific and legal information, along with political and individual perspectives, to elucidate how serious are the effects of climate change in the Arctic.

“The rapidity of the melting of summer ice in the Arctic over the past five years is unprecedented,” she writes, “both since satellite records began to be kept in 1979 and in the much longer oral history of Indigenous peoples.

“An ice-free summer in the Arctic Ocean was not predicted to occur until the middle or end of this century. Now, according to some predictions, it may occur by the end of this decade.”

Paying no heed to the infinitesimal number of climate change deniers, Wright firmly places much blame on human behaviour.

“Rapid economic development in Asia and sustained industrial activity in the ‘developed’ world underlie much of the human-made global warming that is currently changing our weather, atmosphere, and oceans. One thing is clear: as global temperatures rise, Arctic temperatures rise faster. We may well have pushed polar ecosystems into a ‘positive feedback loop’ that could be unstoppable.”

It is the plain language of the Inuit that brings home the reality of climate change on the Nunavummiut [the people of Nunavut]. Wright quotes Inuit elders such as Cornelius Nutaraq to explain the impact of global warming.

“I feel the weather is different now from back then…” he says. “There is less snow now. When I was a child, there would be much more snow … to build igluit [houses]. There was enough snow for a slope to form from the top of the hills on downwards. There would be snow all the way up. You could go all the way to the top by dogteam. You could also go upwards from the point. You could build igluit anywhere it sloped downwards. There is not that much snow anymore. We use snowmobiles now. I tried to ride a snow machine to the top the same way I used to go with my dogs, but I failed, as there was not enough snow to get to the top of the hill.”

It is not just the vanishing ice that is creating havoc in the Arctic.

“Inuit sometimes ask what European Canadians are doing on their land in the first place,” Wright writes. “By what right does any non-Inuit nation claim sovereignty over the land or sea of the Arctic?”

“After England defeated Germany in the First World War, the qallunaat came up here and claimed our territory. Our ancestors were never compensated, never paid even though the qallunaat came up here and took over our land. I know our ancestors were very skilled people. They had very few tools but they survived. They were very strong and very capable. Thanks to their ability to survive we are here today. I know if we tried today to do what our ancestors did, we would die because we don’t have the same skills.”

Wright came to the Arctic after having worked in New Zealand, Singapore and Australia. Wright was stunned when she arrived in Iqaluit from Australia, where it was +30˚Celsius versus -30˚with a wind chill 15 or 20˚ colder in her soon-to-be new home. “Walking from the plane to the terminal was an unnerving experience,” she says. “The words ‘what am I doing here?’ did float briefly through my mind.” But Wright stayed and found beauty and wisdom in the north. She describes how the Arctic light can play tricks on the human eye—a distortion similar to a desert mirage, called the Fata Morgana “…a refraction of light that often makes distant objects loom into view or small icebergs rear up like skyscrapers. Ships can seem to float in the air or disappear without a trace. The hidden sun or moon may suddenly blossom just over the horizon and then disappear before rising again. Nothing is as it seems.”

Often Wright uses poetic language to give a feeling for the place. “The long dark of winter can slowly lighten into a flush of pink and lavender where before there was only cold dark snow. Travelling to the floe edge on the spring ice means moving and standing above an oceanic world of animals and plants as rich as any tropical coral reef. For the adventurous traveller or searcher for wilderness beauty, the Arctic is a place where belugas sing like canaries and birds called thick-billed murres dive into the sea depths as easily as tiny whales.” Aboard the Akademik Sergei Vavilov

As well as receiving the Ryga Award, Shelley Wright can now also boast the most northerly book launch in Canadian history. Our Ice is Vanishing was launched at a latitude of 74.2167 degrees north in Lancaster Sound, aboard the Akademik Sergei Vavilov, one of the ships that was involved in the successful search to find the ship for the doomed Franklin expedition.

Wright was aboard the Akademik Sergei Vavilov in September of 2014, about one week after the much-publicized discovery of the sunken Franklin ship, the finding of which was a pet project of Prime Minister Stephen Harper.

FOR BACKGROUND ON THE GEORGE RYGA AWARD AND THE PREVIOUS WINNERS, click HERE Shore to Shore: The Art of Ts’uts’umutl Luke Marston (Harbour) by Suzanne Fournier

Worth Dying For: Canada’a Mission to Train Police in the World’s Failing States (Random House) by Terry Gould

In Praise of Mixed Religion: The Syncretism Solution in a Multifaith World (McGill-Queens) by William H. Harrison

The Voyage of the Komagata Maru: The Sikh Challenge to Canada’s Colour Bar (UBC Press) by Hugh J. M. Johnston In the Slender Margin (HarperCollins) by Eve Joseph

Back to the Red Road: A Story of Survival, Redemption and Love (Caitlin) by Florence Kaefer and Edward Gamblin

The Force of Family: Repatriation, Kinship and Memory on Haida Gwaii (University of Toronto) by Cara Krmpotich

How Does a Single Blade of Grass Thank the Sun? (Nightwood) by Doretta Lau / fiction

Listen to the Squawking Chicken (Random House) by Elaine Lui

Things I heard about you (Nightwood) by Alex Leslie / poetry

Writing with Grace: A Journey beyond Down Syndrome (D&M) by Judy McFarlane

The Compassionate Hunter’s Guidebook: Hunting from the Heart (New Society) by Miles Olson

What I Want to Tell Goes Like This: Stories (Nightwood) Matt Rader / fiction Base Camp: 40 Days on Everest (Caitlin) by Dianne Whelan

Cycling with the Dragon (Nightwood) by Elaine Woo / poetry

Our Ice is Vanishing / Sikuvut Nunguliqtuq: A History of Inuit, Newcomers, and Climate Change (McGill-Queens) by Shelley Wright