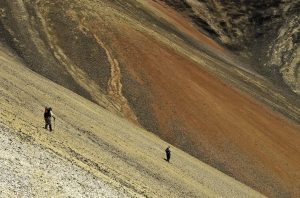 Climbing in the Rainbow Mountains, one of countless breathtaking images from Chris Harris.