In The Miracle Mile, Jason Beck revisits all aspects of Vancouver's hosting of the 1954 British Empire and Commonwealth Games. 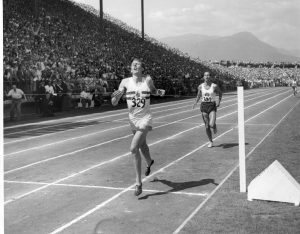 A seldom-seen image of Roger Bannister besting John Landy in The Miracle Mile.

REVIEW: The Miracle Mile. Stories of the 1954 British Empire and Commonwealth Games

In The Miracle Mile, Jason Beck dusts off the specifics of the city’s bid to host the ’54 Games and the human stories of the remarkable athletes who made those ten days — July 30 to August 7, 1954 — a watershed in B.C. and Canadian sports history. After reading The Miracle Mile, Roger Robinson says, “you will never think again that sports stars are all brainless and boring.” — Ed.