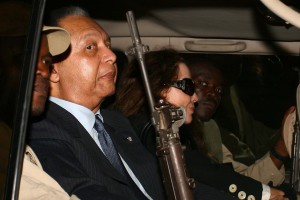 Alain Deneault’s Canada: A New Tax Haven (Talonbooks) shows how the swashbuckling pirates of yesteryear have morphed into modern plunderers, many of whom are linked to Canadian banks.

Tax evasion is illegal; tax avoidance is not.

That’s the gist of a new expose subtitled ‘How the Country that Shaped Caribbean Tax Havens is Becoming One Itself.’ According to Deneault, our elected politicians have created subsets of laws with loopholes that now allow tax havens to thrive.

It has become respectable to hide your dough. As Canada’s former finance minister, Paul Martin, who later became Prime Minister, was widely known to have sequestered much of his corporate wealth in the Caribbean so he could be immune to Canadian taxation. Of course the likes of Paul Martin can argue they are not ‘evading’ taxes in the sense of failing to meet their legal obligations; rather they are seeking to rationally, within the law, minimize taxes as a cost of doing business or protecting their income.

Deneault’s book covers such events as how, in the 1950s, an ex-governor of Canada’s central bank attempted to establish a low taxation regime in Jamaica. A decade later, the transformation of the Bahamas into a tax haven with seemingly impenetrable banking secrecy was shaped by a Canadian minister of finance who sat on the Royal Bank of Canada’s board of directors.

Canada: A New Tax Haven, translated by Catherine Browne, reviews the history of Canada’s involvement with Commonwealth Caribbean nations as they developed banks where Canadians and other citizens could place their money to shield it from the taxman – known as tax havens.

By page two, Deneault provides the reason why avoiding taxes is bad for Canada when he reveals that by 2012, Canadians had “invested” more than $155 billion in seven offshore tax havens. “Under this practice of tax avoidance,” he writes, “citizens are deprived of money to fund public services, and the state as defender of the common good looks like a joke.”

Among individuals that Deneaults cites as legally-abiding citizens who ‘avoid’ taxes are the financial journalist Diane Francis, who herself has provided profiles of some of Canada’s tax avoiders. Quotations below are from Francis:

The Irvings—“New Brunswick is a company town owned by the Irving family…But technically, ownership is held in a series of trusts in Bermuda.”

Harold Siebens—“sold his 34 percent of Siebens Oil to Dome for $120 million in 1978 and immediately became a permanent resident of the Bahamas.”

Frank Stronach—“Today, however, he is clearly a globalist living in a tax haven….”

David Gilmour (Peter Munk’s partner)–“…went to the Bahamas. He said his family had paid high taxes in Canada for five generations and he was sick of it.”

Deneault alleges there is a double standard in governments trying to collect taxes while at the same time encouraging tax avoidance: “The money accumulated in these outlaws’ dens moves around without any legal, fiscal, political, or regulatory constraint, as states encourage the emergence of a class of privileged property owners who are then courted by these same states offering new political and fiscal incentives.”

He concludes, “the framework of corporate globalization makes it possible for powerful people to bypass the constitutional principles that are the foundation of states, and Canada in this sense is pursuing its own destruction.”

One of the outcomes of a tax avoidance ethos, as recounted by Deneault, is the chilling story of how the notorious Haitian kleptocrat Jean-Claude Duvalier and his wife Michele were able to launder some of the money they had plundered from their poverty-stricken country’s government bank accounts when they fled the country in 1986. “Baby Doc,” as he was known, basically robbed his country with the assistance of Canadian institutions. Baby Doc’s father was the equally vile Francois “Papa Doc” Duvalier who ruled Haiti with an iron from 1957 to 1971.

When even Swiss banks decided to freeze Baby Doc’s accounts, the escaping couple turned to Canada. According to Deneault, they had some of their advisors “convert into cash a sum of $41.8 million in Canadian treasury bills.”

The treasury bills were considered ideal because they could be bought and sold with a degree of secrecy approaching anonymity. One of Duvalier’s lawyers, Alain Le Fort from the Geneva law firm of Patry, Junet, Simon and Le Fort, began the process at the RBC’s headquarters in Toronto to move the deposed dictator’s money from Canada to a tax haven of Jersey in the U.K. It was a complex operation involving the securities being split from their ownership records and further movements between HSBC Bank in Jersey, the RBC in London, the Banque Nationale de Paris, and sundry Swiss institutions.

Despite guidelines requiring banks to determine customers’ identity, according to Deneault, “the RBC admits that it simply relied on the impeccable credential of the two lawyers, Le Fort and [John Stephen] Matlin [from the British law firm Turner and Company], who were conducting the operation. The bank later claimed that it would have refused the money had it known who the true beneficiaries were.”

It is important to note that it is unlikely this kind of transaction would happen today as a 1989 law was enacted to crack down on such practices. Deneault chronicles why and how Canadian banks have had a long history in the Caribbean. “The economic group ruling the colonies that would eventually become Canada,” he writes, “had always had an eye of the Caribbean. This was especially true of Halifax merchants, who were interested in the West Indies trade. From the eighteenth century on, these merchants grew wealthy by exporting salt cod and lumber to the islands and importing coffee, sugar, molasses, and rum.

“…The Halifax Banking Company was founded by a privateer who had sailed Caribbean waters. Around 1814, Nova Scotia privateers – violent seamen authorized by the British government to attack merchant ships designated as enemy vessels – deplored the lack of proper banking services in the port of Halifax. The privateers complained that they had to rely on private money-changers to dispose of the foreign exchange accumulated as they went about their professional duties. One of these moneychangers, Enos Collins, himself an ex-privateer, had the idea of creating a real bank and was able to carry out this project in 1825.”

These days Canada has one of the lowest corporate tax rates in the world. Even the IMF (International Monetary Fund) has suggested Canada could raise its maximum tax rate for high income Canadians by as much as 15% without causing capital flight.

According to Deneault, loopholes now encourage companies to relocate to Canada rather than to Barbados or Bermuda. In the book, Deneault places much of the blame directly on Canada’s former prime minister. “Today,” Deneault alleges, “our country’s laws and public policies apply only to citizens belonging to social classes unable to take advantage of loopholes that our indulgent [Steven Harper] government has created for the benefit of the powerful.”