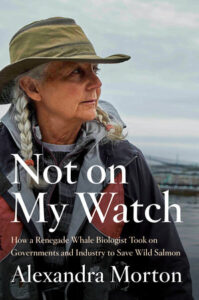 Alexandra Morton’s story of her lifelong struggle, Not On My Watch: How a Renegade Whale Biologist Took on Governments and Industry to Save Wild Salmon (Random House $35) has captured this year’s George Ryga Award for social awareness in literature.

“Morton’s book is a record of impassioned, long-term commitment and self-sacrifice. Salmon are the lifeblood of our Pacific Coast, and in telling her courageous story, Morton, the activist-on-a-shoestring par excellence relates her incredible story of bringing to account the corporate and government bureaucratic scofflaws who for over two decades countenanced malfeasance of the gravest degree in their ‘stewardship’ of wild salmon stocks.

“We’ve been within a whisper of losing our wild salmon populations—as well as the endangered livelihoods of the mostly small-town and Indigenous wild salmon fleet families—if not for the work of this remarkable campaigner and researcher. It was Morton who finally proved conclusively that farmed fish transmit the deadly pathogen that has been devastating the Pacific Coast wild salmon when for decades a legion of well-paid bureaucrats looked the other way.

“A modern day Joan of Arc story: her example of fighting for environmental, social, community, and multicultural justice deserves being taught to every B.C. student.”

The award is sponsored by Yosef Wosk.

In 2003, Vancouver writer Maggie de Vries won the first Ryga Award for her memoir Missing Sarah (Penguin Canada) about her sister who went missing on the Downtown Eastside. In 2004, The Greenpeace to Amchitka: An Environmental Odyssey (Arsenal Pulp Press) by the late Robert Hunter was selected and the award was presented to Robert Hunter’s widow during a Greenpeace crew reunion. In 2005, the winning book was In Plain Sight: Reflections On Life In Downtown Eastside Vancouver (Talonbooks), edited by Leslie Robertson and Dara Culhane.

Information about more subsequent winning titles (and other B.C. awards) is available at this link: https://bcbookawards.ca/ 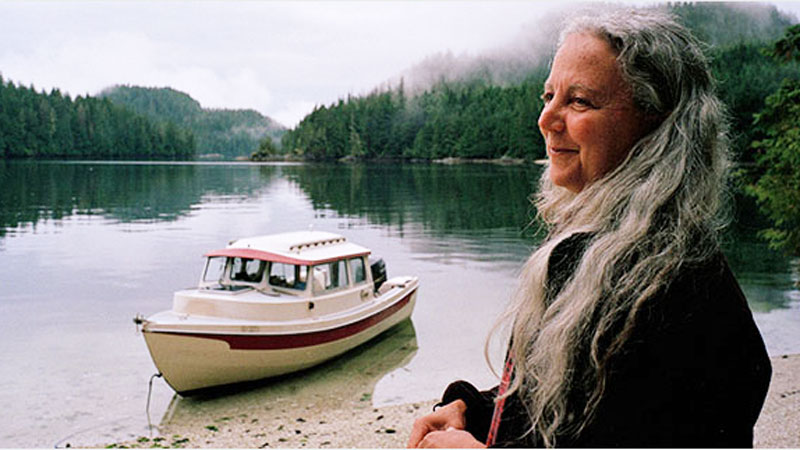 Alexandra Morton in the Broughton Archipelago.

From an early age, Alexandra Morton was fascinated with whales. After graduating from high school in Connecticut, she moved to California to study and research marine animals.

“When I was 18,” she said, “I naively thought that if I looked hard enough, I could understand the communication between two whales in a tank in Los Angeles. I was wrong.”

In 1979, Morton moved with her husband, filmmaker and photographer Robin Morton to the little B.C. settlement Echo Bay to study whales in the wild. Tragically, in 1980 Robin Morton died while filming whales. As a single mother with two small children to raise Alexandra took a job working as a deckhand with a local fisherman, Bill Proctor.

Ten years later, Alexandra achieved recognition as a writer with her children’s book, Siwiti: A Whale’s Story (Orca, 1990), which went on to win the Sheila A. Egoff Prize for Children’s Literature. This account of one year in the life of a young whale turned out to be the launching pad for decades of public advocacy work for the protection of whales in the Broughton Archipelago and for the elimination of fish farms, which were deleterious to wild salmon populations, a major source of food for whales.

Siwiti was followed by In the Company of Whales (Orca, 1991) that explores Morton’s efforts to better understand the habits and behaviors of orcas through diary entries, notes and photographs.

Morton has devoted much of her life to producing scientific research to prove the biological threat of industrial net-pen feedlots in natural environments. She has the proof, she says to show that: “The science is clear these operations risk wild fish populations by intensifying disease, and they deplete world fishery resources to make the feed. They privatize ocean spaces and threaten our sovereign rights to food security.”

In 2004, Morton co-authored A Stain Upon the Sea: West Coast Salmon Farming (Harbour Publishing) that won the Roderick Haig-Brown Regional Prize. That same year, Morton also published Beyond the Whales: The Photographs and Passions of Alexandra Morton (TouchWood Editions). She tells of a special encounter: “Some time ago I was given the opportunity to meet Jane Goodall. I was spellbound by my childhood idol. She radiated grace, and the wisdom of the Earth. When a lull in the conversation opened, I stepped forward and asked, ‘Jane, do you think there is hope?’ Her answer came back crystal clear, ‘Yes.'”

Earlier, Alexandra Morton had co-authored with her former boss Bill Proctor, his memoir Heart of the Raincoast: A Life Story (1999), telling of Proctor’s experiences and contacts on the coast where he was raised, without public schooling, by his parents. It was reprinted by Touchwood Editions in 2016.

Morton’s own autobiography, Listening to Whales, What the Orcas Have Taught Us (Ballantine Books/Random House, 2002) describes her efforts to study communication in whales including theories on whale intelligence and their underwater world of communication, as well as her own life in the wilderness studying whales and raising children.

One Response to “Morton gets Ryga Award”