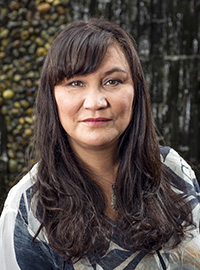 Renae Morriseau of Vancouver has been widely seen for her ongoing role in the CBC TV series North of 60. Originally from Manitoba and of Saulteaux and Cree descent, she was accorded the 2015 City of Vancouver Mayor’s Arts Award for community engaged arts “for her work cultivating social justice and inclusiveness through theatre and music.” Also involved in television production, Morriseau is a member of an aboriginal women’s hand-drumming group, M’Girl, that has performed in New Zealand and Germany. This group has a CD called Fusion of Two Worlds. She is also highly active in working with Vancouver Moving Theatre.

In 2016 she accepted the post of aboriginal storyteller in residence at the Vancouver Public Library for a four-month term.

According to a VPL press release, she says, “We’re at an exciting time for innovative storytelling between Aboriginal and non-Aboriginal Peoples in Canada. This is a great opportunity to invigorate Canadian consciousness on reconciliation and understanding what it means to be an indigenous person in Canada in the 21st century.

“I’ve seen the power of story as a form of leadership and healing in many First Nation communities. As the library’s aboriginal storyteller in residence, I look forward to sharing stories of our land, history and cultural hopes for a shared future together.”

She is not related to the painter, Norval Morrisseau.