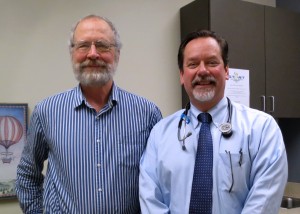 Claudia Cornwall’s Battling Melanoma outlines a triumph over “the fog of medicine.”

An emotional upheaval can follow a diagnosis of cancer, but Claudia Cornwall didn’t waste much time when she learned her husband, Gordon, had melanoma.

The news came just days before the couple, married since 1971, were scheduled to fly to Australia where she would be researching her fifth book, Catching Cancer.

She cancelled her trip. And she got to work researching how she could save Gordon’s life.

The melanoma kept growing, so they first tried an immunotherapy infusion called Ipilimumab. Despite this treatment, her husband developed six tumours in his torso. The Cornwalls were keen to learn more from their North Vancouver-based oncologist Dr. Sasha Smiljanic about a new ‘miracle drug’ called MK-3475 that was not yet approved for widespread use. Oncologist Tony Ribas was discovering MK-3475 was affording remarkable results, without nausea, without vomiting.

After trying unsuccessfully three times to gain access to an experimental treatment process for the drug in Edmonton, Claudia Cornwall tried getting her husband into a trial program in Santa Monica. Trouble was, by then the melanoma had spread to his brain, thereby disqualifying from the trial program in California.

It looked bleak—until Dr. Smiljanic and the Canadian health care system arranged for brain surgery, followed by stereotactic radiation to kill off any remaining tumour fragments in his brain. This re-qualified Gordon for participation in a clinical trial to deal with the tumours in his torso.

Ultimately, as outlined in Cornwall’s instructive memoir, Battling Melanoma: One Couple’s Struggle from Diagnosis to Cure (Maryland: Rowman & Littlefield $38 U.S.), Gordon was able to receive five infusions of MK-3475 at the START clinic in San Antonio,Texas. His doctor at START was Tony Tolcher, a transplanted Canadian who graduated from medical school at UBC.

The impact was almost immediate. “Three days after he had his first infusion,” says Cornwall, “his cancers started melting away. By the end of his treatment, all the tumours were gone!”

But Gordon Cornwall’s life was not saved solely by a miracle drug with a name that sounded like some kind of Russian rifle. If his wife had not been so relentless and efficient in navigating his medical path, he would have been toast.

Or, as Claudia Cornwall modestly put it, the book “also demonstrates what activist patients can do to help themselves.” The START clinic in San Antonio.

The promo copy for this book is concise and can’t be improved upon:

“In June 2013, Gordon Cornwall’s melanoma went metastatic and spread to his brain. He and his wife, Claudia, thought it was ‘game-over.’ But his oncologist encouraged them to look for a clinical trial that might work for his form of melanoma. After embarking on a continent-wide search, they found a study in Texas with spots for just two more patients. They scrambled to get Gordon enrolled, and in August 2013, three days after he had his first infusion, he was astonished to see a lump on his shoulder softening and shrinking. Three months later, in November, a CT-scan revealed that all his tumors had disappeared.

“This story of one couple’s battle to beat melanoma illustrates how a new treatment, immunotherapy, can defeat even aggressive forms of the disease. It also shows how patients can access the most advanced therapies by enrolling in clinical trials. Claudia describes Gordon’s case and learns from conversations with eminent researchers. She paints a portrait of an illness that is difficult but not impossible to combat. With vivid firsthand accounts from their diaries, as well as Claudia’s intimate narrative of the ups and downs of cancer treatment, this book will be a ready resource for melanoma patients and their families. It demonstrates how they can fight the disease medically as well as support each other emotionally and physically.”

Put bluntly: The medical establishment is understandably taken aback when patients consult Dr. Google, but the modern communication skills of the Cornwalls via the internet proved to be as life-saving as the latest drug.

“The world of cancer is changing rapidly,” says Claudia Cornwell, “and now with the latest scientific data only a few keyboard clicks away, patients and their families can access the most up to date information and find treatments for conditions that only recently were deemed incurable.”

The so-called miracle drug MK-3475 is now known as Kaytruda and is approved in both the U.S. and Canada.