In her unprecedented memoir of human trafficking and labour camps, Lucia Jang describes what it takes to survive as a woman in North Korea. 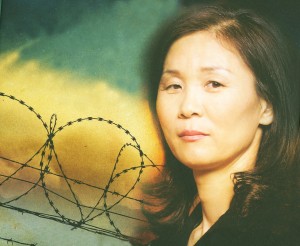 Luicia Jang is free in Canada, but never free of memories.

During yet another famine, Lucia Jang was expected to choose between aborting her late-term baby or give it up to be killed—a North Korean variation of Sophie’s Choice (the movie set during the Holocaust, starring Meryl Streep).

In the final chapters of her nightmarish memoir, Between the Sun and the Moon: One Woman’s Life in North Korea and Escape to Freedom (D&M $32.95), Jang decides to save her child, at all costs, and ultimately escapes to Canada.

Twice, Lucia Jang had been caught outside North Korea illegally: the first time Chinese police deported her back to the hermit state and to prison; the second time she was recaptured by a border guard, after she became pregnant in China, but she was released temporarily due to prison overcrowding.

Assisted by award-winning journalist and co-author Susan McClelland and translator Soohyun Nam, Jang has provided a riveting testimony about North Korea’s atrocities and human-rights’ violations. Along the way, the reader realizes the adjective “Orwellian” fails to adequately describe the culture of North Korea. The all-knowing, all-powerful state led by Kim Il-sung is forever omnipresent in homes and schools where portraits of the “great father and eternal president” are hung. Everywhere else there are informants and the secret police, the Boweebu, who can make families vanish. Party leaders at the local level monitor the behaviour of families. North Koreans must publicly denounce their own crimes and personal failings at regular meetings known as saenghwalchonghwa.

From her diary, sandwiched between two letters to the son she refused to kill, we learn Lucia Jang was born in the 1970s to an engineer father and kindergarten-teacher mother. Her parents weren’t members of the communist party because relatives had fled to South Korea, which “was one of the worst things that could befall a family.”

In North Korea, a family’s status is based on its relationship to the ruling party. A family can be punished for generations. Jang’s family was forced to live in an unheated house, far from the capital, with no party perks or privileges. Food was scarce throughout her life. The Jangs often nibbled weeds to ease their hunger pangs, and as a child she played games like “ration shop.”

In school, students learn North Koreans are of pure spirit and mind, and “all the rest of the people are beasts.” Conversely, despite omnipresent surveillance, rape and physical violence are common. Jang’s first child was born from non-consensual sex. She chose to marry the father, who turned out to be an alcoholic. He beat her and left her. Her mother arranged a forced adoption for her first child.

Desperate to help feed her family in the face of famine, Jang began to illegally cross into China to sell food. She was forced to sell sex at one point just to eat, although how much of a choice and how much of the situation was rape is murky to the reader and maybe even to Jang, too.

Eventually, after her capture by a border guard. Jang finds herself imprisoned in North Korea for a second time. Due to prison overcrowding, she returns to her family home where the mother of a friend informs Jang she is now under her watch. “The baby will be killed after it is born,” the visitor tells her. Who is to do the killing? Is it Jang or the state? This information is left unclear. Jang’s mother tells her daughter to do whatever she chooses, and so her journey to freedom begins. To escape what is arguably the world’s most repressive society, Lucia Jang must turn her back on her family forever.

In his Afterword, Stephan Haggard of the UC San Diego School of International Relations and Pacific Studies, summarizes: “The power of this account rests … on underscoring the oppressive constraints of the Kim family regime, a silent but enduring and all-pervasive presence in the life story of every North Korean … This memoir, and others like it, pose one of the central, moral issues of our day: how to bring freedom to North Korea.”

Keven Drews is a full-time journalist who is concurrently pursuing a Master’s degree in creative writing at Pacific Lutheran University in Tacoma.