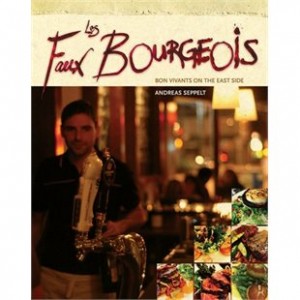 Literary culture vultures lost a favourite hang-out when the bohemian Bukowski’s closed on Commercial Drive in Vancouver after more than 25 years. It was chef Andreas Seppelt’s first restaurant. It was followed by his “sweetly iconic fish shack” called Go Fish in 2004, then another successful eatery he opened in 2008 called Les Faux Bourgeois.

More than a traditional cookbook, with recipes often tweaked by West Coast flourishes, the volume compliments and entices ‘bon vivants on the east side’ with sidebars and stories about ingredients such as cheese, chacuterie and wine.

Seppelt has also been a co-owner of Los Cuervos Taqueria & Cantina on Kingsway in Vancouver since it opened in 2013.