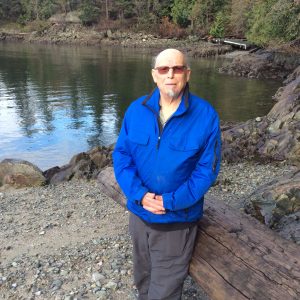 Colin Levings’ encyclopedic treatment of how sea going salmon, trout and char make their transition from fresh to salt water (and the other way) at the river mouth, Ecology of Salmonids in Estuaries Around the World: Adaptations, Habitats and Conservation (UBC Press 2016) provides case histories dealing with BC estuaries and species while incorporating conservation issues. That is also an on-line appendix that provides a primer on salmonids and estuaries for the citizen scientist.

Born in Victoria in 1942, Levings of Lions Bay is a long-time West Coaster who is donating his author royalties to the Pacific Salmon Foundation, a major sponsor of the book. He has spent 54 years working and writing as a marine scientist, mostly with Fisheries and Oceans Canada at the lab in West Vancouver. He went to high school in North Surrey and as a youth spent a lot of time fishing on the lower Fraser River. He studied at UBC and Dalhousie University. Over his career on the BC coast he poked into many of the inlets and estuaries between Boundary Bay and Haida Gwaii, researching salmon habitat.

He has also published a memoir of his life on the Motor Vessel Western Flyer 1962-1963 and other influences on his career in marine science–Chiefly between Kodiak Island and Cape Spencer, Alaska (2016). Argonauta (Newsletter of the Canadian Nautical Research Society) Volume XXXIII Number 3:5-19

Also the author of about 200 scientific papers, he increasingly spends time at Pender Harbour, teaching his five grandsons to fish.

Proceedings of the National Workshop on Effects of Habitat Alteration on Salmonid Stocks. (Ottawa: Government of Canada, 1989) (with Blair Holtby and Michael Henderson co-editors)