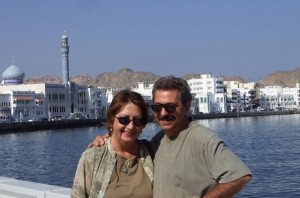 Judy Smith of Castlegar has self-published Out of Poverty: Living and Teaching in Asia (Tellwell Talent 2016) to document the years she spent abroad teaching English with her husband Roger Cristofoli, mainly in South Korea, Thailand, China and Oman. “At the brink of losing their home and going on welfare, they happened across an advertisement for English teachers in South Korea. This led to a ten-year adventure from a cockroach-infested hovel in Korea to the incredible architecture of old Krakow to a posh 2-living room villa in Oman.” Accommodation in China was unheated; treatment in a Thai private school was hostile–as was their reception outside their teaching and living quarters in Oman. Smith began this teaching odyssey when she and her husband were in their mid-fifties. 978-0-7726-6974-2 $49.95

They set out on their 13-year odyssey in 1999, when, living in Castlegar, in danger of losing their home, caught in the bind of middle-aged poverty with a full but useless cart of degrees and experience, they sought economic salvation by joining the cadre of Canadians teaching English overseas.

They weren’t completely naïve about leaving the safety of home in order to find employment. Smith had worked as a nurse in northern Canada in difficult and impoverished conditions. She later wrote about that experience in Native Blood: Nursing on the Reservation (Oberon Press, 1994). And Cristofoli, a teacher and carpenter, had worked in several areas of BC.

In Castlegar, their home was a hub of social life, a cornucopia of garden produce, handmade furniture, beautiful colours and warmth. The bank’s repossession of their home was a sock in the guts, but they opted to invest in their overseas adventure with excitement and hope.

Imagine their surprise when contracts went sour, housing was deplorable, students cared less and co-workers were often weird and unpredictable. While some schools were welcoming, in one situation the neighbourhood was not. They found beautiful housing in a compound in East Salalah in Oman – but outside the security of that home they were pelted with rocks, screamed and sworn at by the children of ex-slaves, and accused of being wealthy white foreigners, which in that context, they were.

That’s not the whole story by any stretch. There were many good time: teaching engaged and intelligent students in China; an unexpected moment of happiness in a packed and steamy bus in Thailand; in the midst of a modern Islamic country, a spontaneous Christmas potluck complete with friends and smuggled ornaments festooning a single branch; the unexpected hospitality of a family completing their Eid celebration by welcoming strangers into their home for a lush feast; and the sheer joy of the musician couple, Smith singing and Cristofoli on his Gibson, teaching Canadian folks songs like Rita MacNeil’s Working Man.

Their years of work overseas, about a third of a person’s working life, became their way of life. It challenged their ability to adapt, negotiate, leave bad situations, and to acknowledge and examine their own preconceptions and stereotypes.
With the use of prose, poetry, photos and letters home, Smith provides a primer for anyone thinking of teaching overseas. If you’re looking for a view through rose-coloured lenses, this isn’t the book for you. If you want one woman’s truth of cultures and countries she grew to despise or to love, then this book delivers.

As Smith says in retrospect and to her astonishment, “the most difficult travelling experiences were also the most enjoyable.”