Keller gets on VPL’s “Walk of Fame”

A marble plaque honouring Betty Keller will be placed in the outside plaza of VPL Central alongside those for previous Woodcock winners. 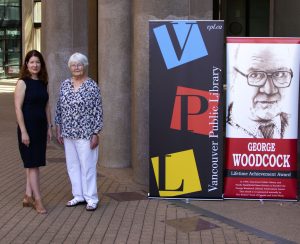 When Keller became a writer in the late 1940s, she recalls little support for authors: “There were no writers’ groups, no one organizing writers’ workshops, or writers’ festivals,” she says.

In 2021, Vancouver Public Library and Pacific BookWorld News Society were pleased to announce that Betty C. Keller is the 28th recipient of the $5,000 George Woodcock Lifetime Achievement Award for an outstanding literary career in British Columbia.

The jury statement commended her contributions to B.C. as a writer, editor, teacher, mentor, arts activist and organizer: “Hundreds of writers have been nourished and encouraged by her dedicated teaching and mentoring. Her greatest legacy is as the indefatigable founder and innovative producer of the Sunshine Coast Festival of the Written Arts, one of the great literary gatherings in Canada. Betty Keller is a long-respected matriarch of the literary arts in this province.”

Co-sponsored by Yosef Wosk and the Writers Trust of Canada, the province’s most prestigious literary award is presented annually in June when a plaque of B.C. marble is installed in VPL’s Woodcock Walk of Fame in conjunction with a City of Vancouver proclamation of BC Author Appreciation Day.

“It’s so great to see Betty recognized with a major award,” said book publisher, Howard White. “She is one of those rare writers who has put more effort into enabling and promoting other writers than into her own cause. Her contribution to letters in B.C. has been huge, and until now, mostly unsung.” 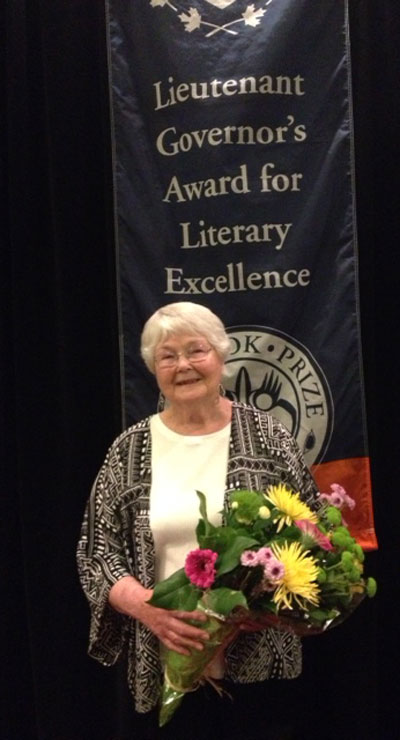 Previously, Keller earned the Lieutenant Governor’s Award for Literary Excellence in 2015. As a pioneer of the literary climate that many take for granted in the 21st century, she noted, at the time of winning the Lieutenant Governor’s Award: “By the time I decided I was really going to become a writer in the late 1940s, there was no creative writing department in our single university. There were no writers’ groups, no one organizing writers’ workshops or writers’ festivals, and the only publishers were in some place called Toronto–that we don’t talk about. Then all this vibrancy came out of the developing publishing companies and creative writing departments so that we ended up a few decades later with one of the most vibrant publishing and writing industries and scenes in the whole of Canada–and then beyond the borders.”

Betty Carol Keller–author, playwright, historian and editor–did most of the heavy lifting to create the first annual literary festival in B.C., the ongoing Festival of the Written Arts in Sechelt. Significantly, its mandate from the get-go has been to focus on British Columbia’s authors, not necessarily those published by larger eastern Canadian or international presses. The Festival is now preparing for its 39th season.

Along the way Keller has written seventeen books and served as one of B.C.’s most prolific book editors. “I’m not sure what the ‘C’ stands for in Betty C. Keller,” writes Jan DeGrass, “but I think it must be Constancy. No editor, teacher or mentor is as constant in her monitoring of the many writers whose lives and careers she has touched.