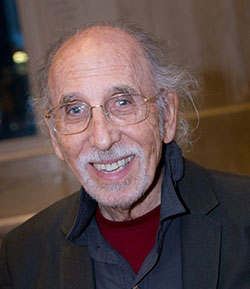 Professor emeritus at Simon Fraser University in the departments of English and Humanities, Jerry Zaslove died June 23. His publications included writings about contemporary visual art, literature and critical theory including writings on the work of artists such as Jeff Wall and Alex Morrison.

Zaslove wrote A Dossier Against Cynicism: Two Essays for Robert Chaplin (Unit/Pitt Publications Studio, 2014) a critical volume accompanying the exhibition Robert Chaplin: About Time in which Zaslove explored the relationship between culture and bureaucracy, between artists and institutions, and between cynical and anti-cynical culture. 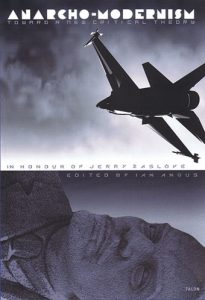 For decades, Jerry had been a keen participant and active voice in Vancouver’s cultural affairs. In 2001, an essay collection was published about Zaslove, Anarcho-Modernism: Toward a New Critical Theory in Honour of Jerry Zaslove (Talonbooks $29.95) edited by Ian Angus that includes thirty-eight pieces unified by a combination of the playful, primitive aesthetic of literary modernism with the anti-authoritarian, anarchist praxis of radical democratic politics.

In 1965, when SFU first opened its doors, academics from all over the world joined the staff, hoping the school would live up to its plans for radical egalitarian education. Jerry Zaslove was there from the beginning. He took mandatory retirement at the age of 65. In the ongoing debate surrounding Canada’s academic retirement policy, his agile mind, and his still-agile basketball prowess, would be a good case for the opposition.

During his 35 years of teaching, Zaslove consistently discussed writers, artists and scholars who had warned about a world of misplaced power. He is the founding director of The Institute for the Humanities, an activist-oriented public education centre based out of SFU.

Despite being in demand for advising Ph.D students and doing research, Zaslove has taken a group of undergraduates to the Prague Summer Field School for the last three years. There, he lives in a tiny dorm room with a hard single bed and a small desk. At the end of the term his once-stark room is decorated with posters and toys bought in art exhibits and street fairs. Zaslove climbs mountains with the kids, takes the tram across town to the university each morning and cracks jokes on road trips. Or he will sit quietly on the bus and answer simple youthful questions. Invariably the subject of Franz Kafka will arise. 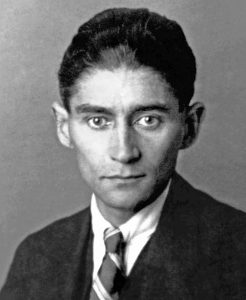 Franz Kafka (above). Jerry Zaslove once admitted to a class: “When I was young, I thought I was going to become Kafka.”

Franz Kafka is known as a German-speaking Jew who lived in Prague, but his family did not have much Jewish culture or sense of history. Prague was a world of hybrid identities. In his fiction, Kafka depicts mystified individuals who are squirming against a bizarre bureaucracy. Hence the popular term, ‘Kafkaesque.’ You don’t have to read The Trial or The Castle to use that term; you just have to fill out an income tax form or try to reach a human being at Telus.

Students of Zaslove learn to de-mythologize notions of Kafka as a depressed existentialist. Having explored his short stories and letters, Kafka is revealed as a playful storyteller committed to rationality. “I really see Kafka as a deep psychologist,” says Zaslove, “and someone who loved people and things, but saw these in a state of constant flight and deterioration, subject to powers that were always changing.” The people of the Czech Republic, for example, have endured tumultuous events in the 20th century, including Nazi takeover and Soviet rule.

Born in 1883, as a young man he was obsessed with dying. Tuberculosis overcame him in 1924. Embodying the prophetic terrors of his fiction, his two beloved sisters–and Milena, his only great love–died in concentration camps.

Kafka was an artist of great integrity–highly sensitive and fearful–who maintained a surprisingly basic desire for a home, a wife and children. His inability to fulfill the simplest tasks of manhood haunted him. When he was teaching about this remarkable character, Zaslove once smiled and confessed to his class, “When I was a young man, I thought I was going to become Kafka.”

The voice of the teacher, as much as the object of study, can compel the student to learn more. That’s why SFU Humanities professor Ian Angus has gathered 38 essays in a tribute to Zaslove called Anarcho-Modernism: Towards a New Critical Theory in Honour of Jerry Zaslove (Talon $29.95). It’s a celebration of one man’s literary playfulness, radical politics and inspirational quest for wisdom.

Anarcho-Modernism has five sections, The Industrialization of Culture; Literature and Aesthetics; Public Education and Literacy; Human Rights and Politics; & Anarchism and Friendship, with essays from Robin Blaser, Harvey Graff, David Kettler &.Jeff Wall. In July, when Zaslove received an email of congratulations about the new book in his honour, he replied from Amsterdam, “I don’t know nuddink about no book in my honour or dishonour.” Students have requested Zaslove teach a course on anarchism but it’s not going to happen. “I’m just not hire-able,” he jokes, “I’m going to go to Prague to fall in love.” 978088922457