Livelihoods are hard to come by on the Gulf Islands. 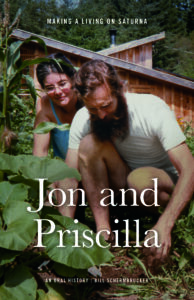 Jon Guy & Priscilla Ewbank circa 1970s shortly after they arrived on Saturna Island.

A couple on Saturna Island had to be “takers and makers of opportunities” says reviewer Christa Grace-Warrick, with jobs like school librarian, janitor, carpenter, firewood cutter, newspaper columnist and caretaker.

Newly-founded Cliffside Publishing, based in the Southern Gulf Islands has recently published the first of four projected small books, Making a Living on Saturna: Jon and Priscilla (Cliffside Publishing $17) by Bill Schermbrucker.

“We are excited and happy with our little venture so far,” says publisher David Osborne.

The author of the inaugural title, Bill Schermbrucker passed away in 2019. By then Schermbrucker had recorded seven oral histories of Saturna residents including those of Jon Guy and Priscilla Ewbank, a couple who came to the island in the 1970s, raised a family, opened a bakery and a store, and contributed much more to the local community.

The following review was submitted by Christa Grace-Warrick of Pender Island. She also includes her own views on Island life. -Ed.

When I started writing on Labour Day, the grand departure was happening as summer people and weekenders left Saturna to get back to school and work. That long weekend is a strange time for islanders. On the one hand we feel forsaken; on the other we feel great relief that we get our island back from the incessant traffic and crowded stores.

There is such a difference between living on an island full-time and visiting it from time to time, even if you own property. There is something here that’s about more than property ownership; it is living in a place during the good times and the not so good … such as power-outages, rain and livelihood challenges. Not to mention serving on all the local organizations that actually make up the fabric of island culture, rather than coasting on top of it. It is something like the French ‘terroir’ but for people, not grapes. 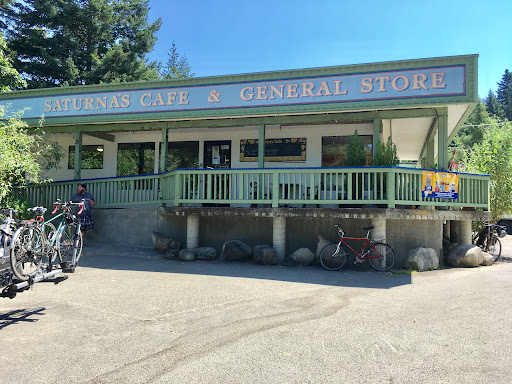 Saturna’s Cafe and General Store was bought by Jon Guy and Patricia Ewbank.

Of course, being full-time has a lot to do with being able—and willing—to work on or from an island. Bill Schermbrucker, a full-time island retiree, recorded seven oral histories of the lives of full-time islanders, the first three of those interviews have already been published as booklets through the Saturna Community Club. The next four interviews were themed, Making A Living On Saturna. 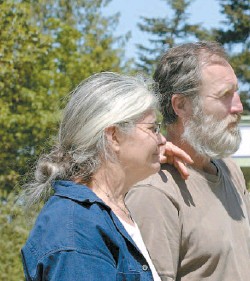 Priscilla Ewbank and Jon Guy, circa 1913.

Though Bill passed away in 2019, his interviews with island families live on. This is the first of the ‘Making A Living On Saturna’ quartet to be published in book format and is the story of the working lives of Jon Guy and Priscilla Ewbank. Like many young folks at that time, they came from away: Priscilla from the United States and Jon from Edmonton. Jon had two daughters and Priscilla had a then-husband. Both were young travellers. Both had been to university. In addition, Jon was a machinist and Priscilla was eager for practical skills. Both clicked with the rural pursuits of Saturna, where they met and, over time, created a blended family and a rich and enchanting life together from a standing start. As Priscilla puts it, they arrived, looked around and saw how they might be of service — and have food on the table. As one door closed, they were always looking for the next one that could be opened: school librarian, janitor, carpenter, firewood cutter, newspaper columnist, caretakers. They were true micro-entrepreneurs — takers and makers of opportunities. 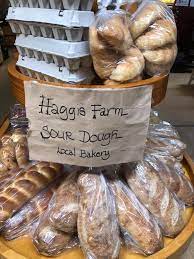 To make a go of it both worked at any number of jobs and lived a thrifty, self-sustaining way of life. That simple life included baking bread, and once they had acquired land, it was the beginning of their very successful core business, Haggis Farm Bakery, which eventually supplied baked goods as far away as Vancouver specialty stores.

The baking of bread embedded them into their community, which for them meant responsibility as well as opportunity. It was that connection to stores and commerce as community hubs which led, once capital was available, to investing it into the community through the purchase, with friends, of the Saturna General Store. Jon once told me that, if the Community Hall was the ‘heart’ of the community, then the General Store was the ‘liver’ of the community.

Buying the store was just the next step in the story of their success at island dwelling, which I hope you will read for yourself —and be inspired. A skillful interviewer, Schermbrucker allows the bigger attributes of persistence, application, ingenuity and canniness to shine through the intriguing doings of lives on a small island.

In true island style, three more talented islanders – David Osborne, Sofia Osborne and Mark Timmings re-ignited Bill’s project to create this eye-catching book. Its many photos tell a good part of the story and make for a thoroughly engaging read that is hard to put down. 978777544201

Making A Living On Saturna: Jon & Priscilla is available for sale on Saturna Island at the Saturna General Store, Vibrational Cafe, and the Saturna market. It is also available at this website: cliffsidepublishing.ca