Ivan Henry went to jail for 27 years after being wrongfully convicted of major sex crimes; now he's fighting for compensation and a formal declaration of his innocence. 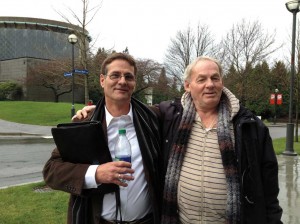 Joan McEwan first heard of Ivan Henry through reports of his acquittal in 2010 by the B.C. Court of Appeal. Curious to know how he’d survived in penitentiaries as a sex offender for almost three decades, she contacted him through his lawyers.

“Half an hour into our first meeting, at a coffee shop in North Vancouver,” she recalls, “I was listening, open-mouthed, to the story of his wrongful conviction.” Ivan Henry was identified as number 12 in this lineup photo used at his 1983 trial. He contends otherwise.

For starters, there was an infamous police line-up. Struggling for air as three policemen held his head in a chokehold, Henry was identified by six of 11 women as a serial rapist that had been terrorizing Vancouver. Though released at the time due to “questionable line-up identifications,” Henry was rearrested ten weeks later when a new VPD detective took over as lead and resuscitated those same identifications.

Henry had grown up rough in the prairies, quitting school after Grade 8 and running away from an abusive home for a life of petty crime. In his early adult years, the crimes got worse. Besides convictions for break-and-enter and car theft, his record includes a three-year prison term for stealing a television and a five-year term for attempted rape.

In the early 1980s, while on mandatory supervision, Henry came to Vancouver. To support his drug-addicted wife and their two young daughters, he worked on construction sites and pedalled designer jeans from the back of his car.

This was also the time when the Clifford Olson sexual murders of young people had galvanized the Lower Mainland. Just as it was being publicized that the RCMP had paid Olson’s wife $100,000 in return for Olson revealing the location of the corpses, a serial rapist was at work, week after week. The police badly needed to find the rapist and fast.

With his record, Ivan Henry was a likely suspect. Police pulled him over in May 1982 and muscled him into that bizarre police line-up. Something not known at the time is that Henry’s wife, before she died in 1990, confessed to one of their daughters that she herself had caused the arrest. She had fingered Ivan Henry as the rapist, not because she believed he was guilty, but because the police threatened to turn her daughters over to Child Welfare and paid her $1,000 for her information.

After the preliminary hearing, Henry—committed to trial on 17 counts of sexual assault involving 15 women—dismissed his legal aid lawyer. Representing himself, he cross-examined the complainants whose cases made it to trial. As the victims cried and shook under his aggressive cross-examination, Henry as good as accused them of making the whole thing up. The jurors shook their heads in disgust.

The trial judge made errors, too—errors that would not have been made had he appointed an amicus curiae, a friend of the court, to help Henry through the legal process.

Henry was no saint, but his prior conviction for attempted rape shouldn’t have been allowed into evidence. “In contravention of the presumption of innocence, to which every offender is entitled, the judge kept referring to the women’s attacker as ‘the accused,’” says McEwen. “It is obvious that not only had the women been coached by the police, their memories had been manipulated and distorted.

“Expert studies in the area of memory implantation show that people can come to honestly believe they saw things they did not. The six trial complainants who had attended the line-up went from having only fuzzy and distinctly different memories of their attacker to providing very specific and similar descriptions at trial.”

As for the line-up photo, Ivan Henry maintains it is fake. He was never in the line-up, and he was certainly never handcuffed. The judge told the jury, incorrectly, that Ivan Henry’s reluctance to participate in the police line-up implied guilt. Henry asked to take a lie detector test but it was never administered. No physical evidence whatsoever tied him to the crimes. Ivan Henry around the time he was arrested in the 1980’s.

Henry was 35 years old when he was led off in manacles. Most of his time was served in the Saskatchewan Penitentiary, near Prince Albert, and at Mountain Institution near Agassiz, B.C. The horrors of life behind bars as a sexual offender are disturbing and too many to recount here. But whatever his faults, Ivan Henry is a man of extraordinary fortitude, faith and perseverance. He read the Bible and he prayed.

Henry also spent so much time poring over legal texts that they named the prison library after him. His best friend inside, a serial killer, protected him. When Henry’s teeth rotted and he couldn’t get dental care, he yanked them out with pliers.

What got him through was his love for his family and his faith that one day the truth would be known. He never stopped pushing. In October 2010, Ivan Henry was finally acquitted. But there are two kinds of innocence: actual and legal.

Like most wrongfully convicted people, Henry was not exonerated, merely acquitted. Without an official declaration of innocence, such people are often viewed as offenders who got away with it, beat the system on a technicality. Ivan Henry with his daughters upon his acquittal and release from prison in 2010.

Henry is now 68. Trying to adjust to a much-changed world, he resides in the basement of a daughter’s house, playing with his grandchildren, cuddling a chihuahua, struggling to cope. Initially someone posted his address in a nearby mall and he received death threats. He seriously considered whether or not returning to the familiarity of prison might be a better option.

While he waits, he spirals. “Depression’s a common problem among exonerees,” says Tamara Levy, executive director of the UBC Law Innocence Project, one of a few programs in Canada that review claims of wrongful conviction. “While some states in America provide ‘life after exoneration’ programs, our government’s been silent on the subject.”

Lawyers in Henry’s civil case will argue he has suffered humiliation, disgrace and pain, losing his liberty, reputation and privacy, the enjoyment of life and everyday experiences, as well as income, benefits and a pension. His suit also seeks compensation for his daughters, who were deprived of a father and of the benefits of a father’s love, guidance and affection.

If past settlements are any indication, he is entitled to a compensation package in excess of $10 million (the amount of tax-free compensation for David Milgaard, who spent 23 years behind bars after his wrongful conviction on rape and murder charges). In the meantime, he survives on a pension cheque.

It is the hope of Joan McEwen that her book, Innocence on Trial: The Framing of Ivan Henry, will lead to a timely and just resolution of Ivan Henry’s lawsuit. As well, she hopes that it will shed much-needed light on the lives of the “post-convicted” in general and, in particular, on the lives of those who are actually innocent.

“Ivan Henry is tragic, living testimony to the fallibility of our legal system,” McEwen told journalist Gary Stephen Ross. “He’s innocent as a matter of fact—not just a matter of law. I want to see him exonerated, and I want to see him properly compensated for the horrible waste of his life. I don’t plan to stop until that happens.” She is far from alone in her belief.

According to former Supreme Court of Canada Justice Ian Binnie, “The disastrous trial and subsequent tribulations of Ivan Henry, including a quarter of a century of hard prison time for multiple sexual assaults he likely did not commit, shines light on an appalling miscarriage of Canadian justice.  Ivan Henry emerges as stubborn and misinformed; a misguided, self-represented litigant. But there are lots of such people trapped in the courts, and the system needs to do a better job of dealing with them.  In Ivan Henry’s case, it failed miserably.”

“The story of Ivan Henry,” says former B.C. Premier Ujjal Dosanjh, Q.C., “demonstrates that, when prosecutors and police blindly pursue convictions, they ignore the inherent obligation of the state to be fair and just. This book should be required reading for every law student, prosecutor, defence lawyer and trial judge in Canada.”

“Reading Innocence on Trial, says exoneree Thomas Sophonow, “brought back vivid memories of my own experience of wrongful conviction. There were so many similarities between Henry’s case and mine, with many of the same players, that ultimately I found it too painful to finish the book.”

“You don’t have to like Ivan Henry,” says Julian Sher, author of Until You are Dead: Steven Truscott’s Long Ride into History,” or agree with everything Joan McEwen says to shudder in horror at how our justice system grinds on and sometimes grinds people in its wake.”