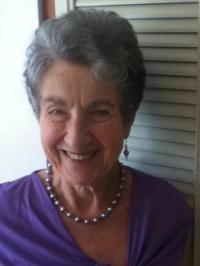 It is the dawning of the aging of Aquarius.

For her second book, Helen Wilkes has encouraged people who are transitioning into a post-work identity to rekindle their passions and curiosity in The Aging of Aquarius: Igniting Passion and Purpose as an Elder (New Society 2018). Whether it’s gardening clubs or social activism, she outlines practical steps to infuse life with a sense of purpose as an empowered elder. Wilkes, for example, has joined protests against the federal governments purchase of the Kinder Morgan pipeline project.

“Despite his promises to open a new chapter in the Truth and Reconciliation process,” she writes, “Prime Minister Justin Trudeau has clearly failed to respect First Nations and their concern for the land. In addition, he has violated his promises in Paris to place Canada in the forefront of efforts to halt climate change. Instead, he has magically found 4.5 billion dollars to buy a pipeline from a private corporation who feared the venture might not produce sufficient return on their investment. 4.5 billion dollars! Your dollars and mine, suddenly available to a government that only last summer could not find a lesser amount to ensure safe drinking water for all Indigenous people whom previous governments had moved to reserves so that we, the immigrants to this country, might buy and own their land as our own private property.”

Retired, with a Ph.D. in French literature, Helen Waldstein Wilkes of Vancouver, born in 1936, first examined her Jewish/Czechoslovakian background in Letters from the Lost: A Memoir of Discovery (Athabasca U.P. $24.95). In 2011, this book won both the Alberta Readers’ Choice Award for best book published in Alberta (fiction or non-fiction) and the Edna Staebler Award for Creative Non-Fiction.

Much of this sophisticated and well-illustrated material was derived from a treasure trove of letters—received by her parents in Canada from family members in Europe from 1939 to 1948—that Wilkes rescued from an Eaton’s Christmas box after her father died in 1959. As Nazis closed in on war-torn Czechoslovakia, her father had managed to escape from Prague with his young family in 1939.

“I think involuntarily of Hilderl,” she writes, “a relative on my mother’s side. Hilderl was a beautiful child known to me only through my photo album. In the photo she is perhaps five years old. Poor little Hilderl. Neither her name nor the details ever varied as my mother told the story: ‘Poor little Hilderl was a delightful child, sweet, bright, charming. One day as she was walking home with her mother, a Nazi tank deliberately drove onto the sidewalk and killed Hilderl. I don’t know how her mother survived. We all thought she would go crazy.”