In the name of medicine 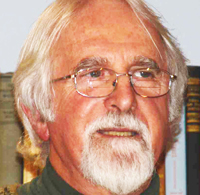 Gary Geddes has spent four years interviewing elders for his next non-fiction book, due in January, Medicine Unbundled: Dispatches from the Indigenous Frontlines (Heritage House), about the segregated Indian hospitals, put in place not to help Indigenous patients but to keep them separate from a white, racist society. “The big presses all said this is a great idea and an important project,” Geddes says, “but they wouldn’t be able to sell it because ‘Alas, no one in Canada is interested in Indians.’ I hope to prove those publishers wrong, not for my own sake, as I am giving any royalties to set up a scholarship in Indigenous Studies at UVic, but because the subject is so important.

“I have no agenda; I write about whatever takes me by the throat and demands its story be told.”

Geddes recently read a residential school narrative in Ottawa and later a young white poet told him he had no right telling that story, which he’d created from hundreds of fragments that had come his way from various people and books, and with a lot of imagination. His two Indigenous friends at the reading, Annie Smith St. Georges and her husband Robert St. Georges, interjected and said they thought the poem was important, powerful and needed to be heard by the white community.

Gary Geddes lives on Thetis Island only a few hundred yards from the site of the notorious Kuper Island Residential School, known by its survivors as Alcatraz. He has already shared stories with survivors of KIRS and is anxious to meet anyone interested in talking about First Nations medical history. He can be contacted at gedworks@islandnet.com or at 250-246-8176.

2 Responses to “In the name of medicine”